Most kids have been to camp. For many, it’s not summer without macramé bracelets and mosquito bites. But what if camp were different? What if students could choose a camp where they could sharpen their music skills from the best teachers, those who do it for a living?

That’s exactly how Camp Electric began. Gabe Dunlap and John Sanders traveled and performed together in a band called Brother’s Keeper. “We would always get asked the same questions,” said Dunlap. “‘How do I get a record deal?’ ‘How did you guys start?’” They realized that sports camps were a dime a dozen, but music camps were hard to come by. And even if you could find one, it was secular, with nothing to do with Christian music or a Christian lifestyle. And so, in 2007, Camp Electric was born.

“We thought, man, it would be a great thing if we could bring these artists that are on tour and have them be instructors,” said Dunlap. “And so, instead of the kids just finding out how to get record deals, they could find out inside information about how [the artists] learn, what equipment they use, what pedal boards, different things like that. And get to hang out. It’s kind of the motto of camp for us, there’s not really a ‘Green Room’ mentality. Everybody eats together, there’s no back stage with these instructors.”

This is the fourth year that Camp Electric has run and the first year to run two weeks. The first week was hosted at Trevecca Nazarene University in Nashville, Tenn., and the second was hosted for the first time at Cedarville University. “It’s smaller this week, which has actually been really nice,” said Ben Richter, lead singer of The Museum, the band that led worship both weeks. “Last week was about 1,000 students, and this week is about 400. And so with that, the kids are getting a little more attention. And even the venue, the theater has been great. It sounds really good, and there’s really just not a bad seat in the venue.”

Students at Camp Electric are 13-to-19 years old and register according to their instrument. The available tracks are electric, acoustic and bass guitar, keyboard, vocals, drums, sound and songwriting. In the morning, all students meet for a worship service. Afterwards, they go to breakout sessions where they learn how their role fits into a band. In the afternoon, they attend small classroom sessions where they work closely with a musician from a well-known band. Every evening, a different band performs a concert, during which some students may even get the opportunity to join them onstage and play along.

TobyMac, a successful Christian recording artist, has adopted Camp Electric as his own. “I came to camp the first year and did a performance,” he said. “When I got there, it just hit me how amazing this concept was. How it’s just so matched up with where I am in life, wanting to mentor artists. I’ve always done it through my label, Gotee Records, but taking that and opening up even a little more to speaking into their lives. I just immediately got it, and I loved everything about it. Just the ability to be able to share how important finding the right band mates is, because they become your family. Sharing how important it is to use your gift wherever you are, not just for a national record deal, maybe it’s in your hometown. All these things just flood through my mind all the time when I’m talking to young musicians, and this is the platform for it.”

TobyMac has performed at every Camp Electric and has used his platform to promote it. “I think my favorite part is just watching the veil come down,” he said. “Unpeeling the layers to what makes up songwriting and what makes up artistry. And how I’m just a normal guy trying to write good songs, using my voice that God’s given me to share this music that God brings through me to people. And I think when you just get up there in front of them and there’s no lights, and there’s no fog machine, and it’s not behind music, they just see ‘oh, this is a normal dude.’ And I think maybe they begin to think, ‘maybe I could do that.’ 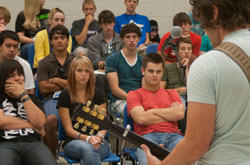