Shape of Sandstone Shapes a Testimony

In late October, Dr. John Whitmore, professor of Geology, traveled with 10 Cedarville geology majors to Denver, Colorado where they participated in the Geological Society of America conference, an annual gathering of over 5,000 professional geologists.

Held in a different city every year, geologists from all over the world gather for four days to present research and discuss new innovations in geology. Though most presenters usually hold advanced degrees, this year two Cedarville University undergraduate students were given the opportunity to make presentations. Junior geology major Sarah Maithel and philosophy graduate Kaleb McMaster presented research posters along with Whitmore.

McMaster reported on the microscopic differences between beach and coastal dune sand along the Oregon coast. Maithel and Whitmore presented data that shows the Coconino Sandstone of the Grand Canyon was not deposited in a desert, as most believe, but was deposited underwater. Maithel and Whitmore found the same mineral, K-feldspar, in the sandstone in Arizona that McMaster found in the wind-blown dunes; but, the mineral was not as well-rounded, indicating that the sand was deposited under water. All of their research was published in the proceedings of the conference.

As the conference started, Whitmore and four of his colleagues, including Cedarville adjunct professor Steve Austin, Ph.D., took the Cedarville students and 40 other geologists on a field trip to Garden of the Gods near Pike’s Peak, Colorado. During the trip, the Cedarville leaders talked about alternative views for how the rocks formed, emphasizing short time spans and catastrophic formation of the rocks rather than slow formation over millions of years.

“The experts were skeptical,” said Whitmore, “but in the end, they conceded that the rocks we examined were deposited quickly and were deposited in water. We let the data speak for itself.” Whitmore also said the Cedarville students interacted positively with others holding opposing viewpoints. A peer-reviewed scientific paper was published describing the field trip stops and the new interpretations regarding the sites they visited.

This is only the second full year for the new geology major at Cedarville. The major is unique in that it emphasizes field experience and research opportunities for undergraduates.  Although the program promotes a biblical view of origins, students are well-trained in conventional theories as well.

“It is important for students to understand both biblical and evolutionary views of earth history,” says Whitmore.  “It helps them to develop their critical thinking skills—an opportunity students don’t get when they are trained under a single paradigm.” 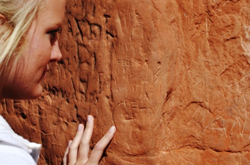 “It is important for students to understand both biblical and evolutionary views of earth history,” says Whitmore. “It helps them to develop their critical thinking skills—an opportunity students don’t get when they are trained under a single paradigm.”