Recently, someone walking into Cedarville University’s dining hall might have encountered a small group of students with bright red plugs stuck in their ears gesturing in American Sign Language over their lunches. The students had just come from a chapel service where Pastor David Mason, preacher of a deaf church, signed his message.

Alpha Sigma Lambda (ASL) is a Cedarville University organization that ministers to both hearing and deaf people on campus while giving students a chance to gain experience using American Sign Language. The group was started years ago, but under President Jonathon McCoy, who is hearing impaired, and Becky Dufresne, the group’s advisor, it has blossomed from six members to over 20. Many members are education majors hoping to advance their knowledge for use in the classroom; but members do come from across the board, some with direct connections to hearing impaired people and some simply to learn.

“God has blessed our org a lot in the last couple of years,” says McCoy. “We want to make people aware that being hearing impaired is not just a disability; there is a whole deaf culture. We are breaking the ice with awareness. We are taking baby steps to ultimately make long strides.”

The organization celebrated Deaf Awareness Week with a number of events on campus. One of the greatest successes of the day was the sale of ASL T-shirts. The organization sold nearly 500 shirts for $15 each. Proceeds went to support Wadia, a 7-year-old deaf girl attending the Caribbean Christian Centre for the Deaf in Jamaica.

The big event of the day was the chapel service set up by ASL. The organization has established a relationship with Liberty Baptist Church for the Deaf in Columbus, a church that conducts their services in American Sign Language for the hearing impaired. Pastor David Mason came to sign his message, which was also spoken through a translator to Cedarville students following a performance by Signs of Worship (SOW). SOW is one of the strongest aspects of the ASL organization. The group is an extension of ASL, though not required for membership, and learns the signs to go with a number of songs. They kicked off their week by also signing at Dayton Avenue Baptist Church on Sunday.

The organization also hopes to increase deaf awareness in the University’s academic realm. Currently, ASL classes are offered for continuing education or elective credits but are not accepted as a global awareness requirement. McCoy is lobbying for more classes to raise a greater awareness. 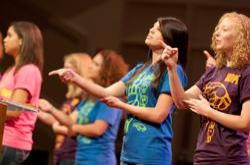