All ideas are inspired by something, even something as mundane as a sweatshirt.

Kevin Sims, Ph.D., professor of political science at Cedarville University, was visiting family in Arizona when a sweatshirt with three words — “Arizona: since 1912” — caught his eye. And that was all it took to spark an idea for a book.

The book, tentatively titled “A Solemn Contract,” explores the establishment of Arizona during the Civil War as the first non-slave territory south of 36°30’, the line below which slavery was legal. It also looks at the ideological connection between President Abraham Lincoln and John Stuart Mill, an English philosopher who spoke out against slavery. Attention will also be given to the pair’s influence on Arizona’s development as a free territory.

And the book couldn’t come at a better time: In 2012, Arizona will celebrate its centennial.

Sims’ research is a trial-run for the new Scholarship Release Program at Cedarville. This pilot program was designed to release professors from one three-credit class to give them the opportunity to be involved in research.

“Cedarville is a unique place in academia,” Sims says. “Our focus is on quality teaching, whereas some other universities focus more on research. We put teachers in the classroom, and any scholarly work is in addition to teaching.”

As soon as Sims heard about the new release program, he applied. “I suppose deep down inside every college professor is this desire to write a book about what you love,” he adds. “Now I can.”

“Dr. Sims’ work is not only fascinating, but also it will clarify a little-known connection between Mill and President Lincoln on the pre-eminent issue of the day — the extension of slavery,” says Tom Mach, Ph.D., chair of the department of history and government at Cedarville. “What has not been previously uncovered is the influence of Mill in this whole process. Sims’ work will make a major addition to the understanding of the many facets of abolitionism and opposition to the extension of slavery, while celebrating the centennial of this important state.” 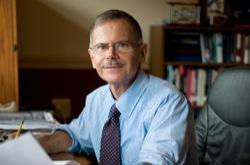 Kevin Sims, Ph.D., is exploring the establishment of Arizona as a non-slave territory in his new book “A Solemn Contract.” The book comes in time to celebrate Arizona’s centennial in 2012. Photo credit: Scott L. Huck/Cedarville University