Cedarville University welcomes Rocco Rotello, Ph.D., to the faculty of the school of pharmacy. He will begin in summer 2011 contributing to the development of the school’s research and professional course development.

From a young age, Rotello showed an interest in the way things work and became fascinated with the complex workings of human physiology. Rotello is a problem-solver, and his desire to research and understand is an outgrowth of his searching personality and love of the learning experience.

After completing his post-doctoral work at Harvard University in 1994, Rotello began his career at Procter & Gamble (P&G) Pharmaceuticals, where he spent 16 years. When P&G sold its pharmaceutical practice to Warner Chilcott in 2009, Rotello began to wonder if God was leading him toward a change of his own. Rotello had always desired to research, learn and teach others, and he often staffed exhibits at scientific conferences to represent his company and educate others. When a friend suggested a career in academia, Rotello jumped at the chance to integrate his desire to research with his love for teaching.

Rotello first heard about Cedarville University through a friend who worked with Athletes in Action recruiting basketball players, and his son had also attended concerts at Cedarville. Deciding to visit the University, Rotello accepted an invitation to a Cedarville basketball game, and he soon became excited about the possibility of teaching at the school.

“When you see how God works,” says Rotello, “sometimes you realize that it’s not about your own efforts at all.”

The process of preparing lectures and exams instead of presenting brands to medical liaisons will be different, but Rotello feels ready for the challenge. He is looking forward to the chance to participate in the University’s developing pharmacy program and use his work experience in the classroom once again.

“”I’m enthusiastic about the vision of the school of pharmacy,” says Rocco, “as well as the new facility and new direction that God is taking me to use my talents and my passion for research.” 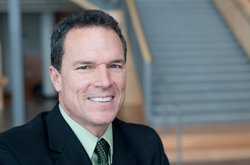