Every year, nursing students benefit from ministry opportunities in Togo, where nursing faculty have worked hard to forge trust and friendships.

I’ll never forget that day in Togo. With the help of a translator and visual aids, a group of Cedarville nursing students presented the Gospel to a 12-year-old girl who was on bed rest due to major leg fractures. The translator’s voice was loud enough for others in the women’s ward to hear. The students asked the girl if she wanted to accept Christ, but she said, “No.” At that moment, her grandmother spoke up, “Well, I do accept Jesus.” As we walked back to the nursing station, a pregnant woman stopped us. “What about me?” she asked. “I want Jesus.”

In 2010, 2,689 Togolese patients and family members at Hôpital Baptiste Biblique (HBB) professed salvation. This May, I will co-lead my 18th team of Cedarville University nursing students to serve in Togo, West Africa. As I prepare to lead this year’s team, I inevitably reflect on many years of ministry in the same setting. The compelling motive for this trip is evangelism and placing students in an environment that opens their hearts to the Holy Spirit’s call to missions.

It all began 20 years ago, when Dr. Irene Alyn, previous chair of Cedarville’s nursing department, took the virgin voyage to Togo in 1991. As she investigated nursing opportunities in the village of Adeta, she established lasting relationships with administrators at HBB, an organization connected to the Association of Baptists for World Evangelism (ABWE). These relationships opened the door for future nursing ministry, and I led the first team of Cedarville nursing students to Togo in 1993. The longevity of this ministry has strengthened our relationships with Togolese missionaries and health care workers. And as a result of the growing ministry, we expanded our nursing program in 1997 to include a minor in cross-cultural nursing.

Cedarville nursing teams in Togo work alongside national nurses to provide care. This is a challenge because the nurses and patients know little or no English, so we rely on nonverbal communication and translators. French is the official language in Togo, but there are also more than 40 tribal languages. One of the most common tribal languages is Ewe, a tonal language, so learning to speak it is a trial-and-error process.

Last year, I was practicing common greetings with a Togolese nurse, who also is fluent in English. “Dr. Baker,” he said, “your Ewe is very good.” It had taken me just 17 years to get the tones correct for common greetings! Evangelism in this context is only possible because of hospital chaplains, who are proficient in the common tribal languages and God’s Word. They translate as Cedarville students share the plan of salvation with their patients.

In hospital wards, clinics and operating rooms, our teams encounter patients with a variety of diseases rarely seen in America, including malaria, tetanus, typhoid fever and other tropical illnesses. Many are critically ill, requiring immediate and aggressive assessment and treatment.  Despite limited resources, HBB doctors and nurses provide excellent care, resulting in remarkable patient outcomes.

When they aren’t in the hospital, the Cedarville teams participate in mobile medical ministries in remote villages, lead Kids Club for 200 Togolese children and assist the ABWE missionaries with various projects. Students experience the Togolese culture by visiting the home of a Togolese nurse in a local village. We pound fufu, a staple food resembling mashed potatoes, and then we enjoy an authentic Togolese meal. We also tour a midwifery clinic owned and operated by Philomena, a Togolese midwife. Faculty members who join the team each year teach college-level nursing material through translators in the nursing school. And together, we all experience the joy of worshipping with Togolese Christians in the village churches. We leave humbled by the spiritual maturity of these believers who live in the midst of poverty and disease.

Students come home from this trip forever changed. And as a result of the many people who have made this ministry possible through prayers and financial gifts, I have seen God use this experience to call laborers to His harvest. Faculty members and graduates of Cedarville’s B.S.N. program are now serving as career missionaries on every continent throughout the world — and for many, the journey to a life of missions began in Togo.

Dr. Lois K. Baker serves as senior professor of nursing and has taught at Cedarville since 1984. She holds a B.S.N. from Nazareth College, an M.S.N. from the University of Cincinnati and a Ph.D. from Wayne State University. Dr. Baker has accompanied more than 100 Cedarville students on nursing missions trips to Togo, and she directs the cross-cultural nursing minor in Cedarville’s B.S.N. program. You may contact her at bakerl@cedarville.edu. 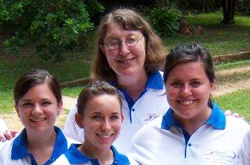