Cedarville University’s Centennial Library recently completed a new Biblical Heritage Gallery exhibit: “Celebrating the Bible in English: 400 Years of the King James Version, 1611-2011.” The gallery is located in the atrium of Cedarville’s Center for Biblical and Theological Studies. All pieces in the display are part of the library’s special collections and will be exhibited through mid-June.

Although this year marks the 400th anniversary of the publication of the first King James Bible in 1611, it was not the first English translation of the Scriptures. Rather, it was the culmination of many extensive translations produced through the 1500s, including the Tyndale Bible, the Great Bible, the Geneva Bible and the Bishops’ Bible. It was not until 1604 that King James united England and authorized a new translation of the Scriptures, building on previous work. Fifty-four scholars completed the first edition, and from the mid 1600s through the 20th century, the King James Bible was the primary Bible of the English-speaking church, still retaining worldwide influence today.

“One would not usually see all of these items in one place,” says Lynn Brock, dean of library services. “It really gives you a sense of the history and progression of the development of the English language Bible.” 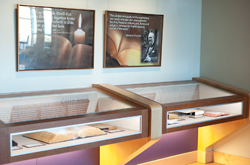