Returning to Her Roots: Cedarville Appoints Chair of Pharmaceutical Sciences

Rebecca Gryka, Pharm.D., Ph.D., may be new to Cedarville, but her family was around before there was even a university.

Her great-great-grandfather emigrated from England and ultimately settled in Cedarville. The family stayed in the area, and Gryka’s grandfather attended the University (then Cedarville College) and graduated in 1915. After World War I, he went on to attend Philadelphia College of Pharmacy and Science and became a pharmacist in York, Pennsylvania.

“I was only familiar with my grandfather’s history after he and his family settled in York,” Gryka shares. “I had no idea of my Cedarville connection!”

Gryka’s first encounter with Cedarville was in 2009 when she heard Marc Sweeney, Pharm.D., dean of the Cedarville University School of Pharmacy, speak at a prayer breakfast sponsored by the American Association of Colleges of Pharmacy (AACP).

“Dr. Sweeney spoke about how the mission of Cedarville is to educate professionals who not only live out their Christian faith in the workplace but who also integrate spirituality into their profession,” says Gryka. “That really resonated with me.”

Gryka already had a position as associate professor of pharmacology and director of the therapeutics division at Loma Linda University’s School of Pharmacy. But after hearing about Cedarville, she became interested in obtaining a position in the new School. She sent in her resumé and was soon hired as the new chair of the department of pharmaceutical sciences.

She says that Cedarville’s integration of health care and faith was a perfect fit for her. “I think that health has not only physical and psychological components but also a spiritual component,” she says. “It is my hope that we will be educating future pharmacists that will have Jesus Christ’s compassion for their patients.”

Gryka served for 20 years at the University of Southern California School of Pharmacy as an instructor; during that time she also spent 10 years teaching nursing pharmacology. She simultaneously spent 30 years as a hospital pharmacist. All these experiences make Gryka a great addition to Cedarville’s faculty. But she’s an even better fit considering how new Cedarville’s program is; when she joined the college of pharmacy at Loma Linda in 2003, that program was brand new, too.

“Starting a new pharmacy school is very labor-intensive,” she says. “The experience that I had at Loma Linda will definitely be helpful.”

“Dr. Gryka brings experience, perspective and credentials that will foster success of our program and the department of pharmaceutical sciences,” Sweeney concludes. “We recognize that she is here by God’s calling and are excited about her role in our program.” 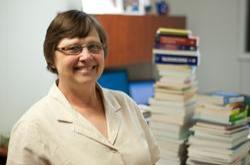