Cedarville University’s theatre program recently received 24 DayTony awards, presented by the Dayton Theatre Hall of Fame. The DayTony awards are presented to recognize outstanding accomplishment both in performance and design in Dayton-area theaters.

Other awards won by the department include 14 awards of merit (silver) and 10 awards of excellence (gold). All three main stage productions were represented in the awards.

Robert Clements, co-director of “Hello, Dolly!” and associate professor of theatre, said, “We are grateful for these honors because they help bring focus to the work being done by Christian artists at Cedarville University. Being part of the DayTonys also gives us a wonderful opportunity to interact with the theatre community in the Miami Valley. The students may also use the awards they achieve in their resumes and portfolios.” 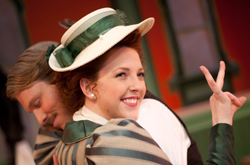