Dan T. Cathy, president and chief operating officer of Chick-fil-A®, Inc. passed the baton of leadership to nearly 650 graduates at Cedarville University’s 114th commencement ceremony on May 1, 2010. Cathy told the University’s graduating class that running the race of life is about the hand-off.

"You can be the best runner in the world, but if you drop the baton," shared Cathy while holding the hollow relay rod and a Bible in his hands, "you will ultimately lose the race." He challenged the class to "not drop the baton" by keeping their lives focused on serving God and others.

Cedarville President Dr. Bill Brown presented Cathy with the University’s Medal of Honor. This was only the 12th time the medal has been awarded by the University. "Dan’s life is marked by excellence, integrity, servant leadership and a clear testimony for Jesus Christ," shared Brown.

The Cedarville department of history and government graduated 40 students from its eight programs and took home more than its fair share of recognition. A total of 19 of majors graduated with honors.

Clara Gebert, international studies major, was awarded the President’s Trophy, the highest honor bestowed on graduating seniors by the University. The award recognized her excellence in the classroom as well as her involvement in discipleship groups and DAE (alumni service organization). Gebert also served as co-captain of the Model U.N. Team and was the Student Government Association vice president for the 2009–10 academic year.

Leanna Baumer, history and political science major with minors in Bible, comprehensive communication, and international studies, was one of six students in the 2010 class to graduate with a perfect 4.0 GPA. Baumer studied abroad in Jerusalem and Dublin, completed the honors program, and obtained two different internships while a student at Cedarville.

The department salutes Clara Gebert, Leanna Baumer, and all of the history and government graduates in the class of 2010. 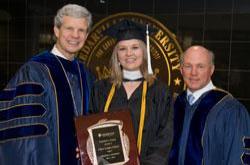 Pictured with Dr. Bill Brown (left) and Mr. Dan Cathy (right), Clara Gebert '10 was one of two recipients of the President's Trophy. The highest honor for a graduating senior, it recognizes leadership, ministry, community and campus involvement, athletic performance, and academic achievement.