In addition, Kate Cella, a senior international studies major, and Jonathan Demers, a history and political science major, were voted “Outstanding Delegates” by their peers.

The goal of each Model U.N. team is to represent their assigned country’s policies and negotiate solutions to a wide variety of global problems in simulated United Nations negotiations. Extensive preparation is necessary to understand complex policy positions on a wide variety of international issues and to essentially become a diplomat of the country they represent.

Delegation awards are chosen by the National Model U.N. staff who identify consistently strong performances by all members of a team over the five days of the conference. Individual “Outstanding Delegate” awards are voted upon by fellow delegates in each committee.

The conference is sponsored by the National Collegiate Conference Association (NCCA), a 501(c)(3) nonprofit organization and non-governmental organization affiliated with the UN Department of Public Information. 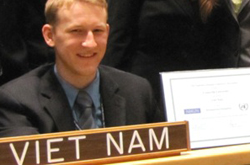