Cedarville University’s High Efficiency Vehicle (HEV) team is making strides toward the future with developments in the area of fuel efficiency. Cedarville’s HEV team is one of the flagship competition teams for the Elmer W. Engstrom Department of Engineering and Computer Science.

The Shell Eco-marathon provided Cedarville University engineering students with opportunities related to the real-world issue of fuel efficiency. The goal of the competition is not to see who can build the fastest car, but to see whose vehicle can consume the least amount of fuel over a set distance. The competition featured schools from the United States, Canada and Mexico.

“It helps students become aware of the issues of efficiency, conservation and being good stewards of the resources that God has given us here on the earth,” Zavodney said.

The competition has two vehicle categories: Prototype, which is focused on reducing drag and making the vehicle as efficient as possible, and UrbanConcept, which are vehicles that look more like a vehicle you would drive on the street. All three of Cedarville’s vehicles, Gold Lightning II (GL-II), Slipstream and Sting, were in the prototype category. GL-II and Slipstream were entered in the combustion engine category and Sting was entered in the all-electric category.

Work for the competition starts just as soon as the previous year’s competition is finished. “Leaders for the next year are chosen and some basic brainstorming about what the next year is going to look like all happens pretty much right after competition ends,” Tessa Hedges ‘13, a driver for the team, said. “Team leaders meet at the beginning of the fall semester to organize projects and create basic goals and deadlines for the year.”

Several new technological developments were made throughout the Cedarville HEV fleet. One of the developments this year was made in instrument display technology. Computer engineering and computer science majors used Android tablets and cellphone technology to link the cars to a server back in Cedarville. The team can then download that data in real time to keep track of the cars and monitor onboard systems wherever they are on the track.

Sting, a second-generation vehicle coming out of the 2006 Slipstream mold, was completed by last year’s HEV team. A new carbon-fiber chassis, an all-electric drive train powered by lithium batteries and a new steel front-end chassis which relocated all steering and braking components inside the wheels to reduce drag were developed by senior mechanical engineering students for their senior design project.

Meanwhile, another group of electrical engineering and computer engineering seniors were developing their second-generation hybrid-electric drive train. This system uses an internal combustion engine to drive a generator which produces electricity to power an electric motor to propel the car.

The team chose to enter Sting in the new electric mobility category. To do this they used the electric motor drivetrain of the hybrid-electric system but replaced the ultra-capacitors with rechargeable lithium polymer batteries.

Once the team arrived in Houston, it was time to put everything they had worked on for the year to the test. Safety inspections must be completed before the driver and the vehicle are allowed to race.

Just as the team was about to take Slipstream in for inspection, they encountered a problem: they had damaged a DC-DC converter, a critical component used to control the voltage coming out of the generator. Since the team did not have any spares, they asked competition officials if they could convert their combustion-engine category vehicle to the all-electric category. After Shell allowed the switch, the team went to work converting the vehicle.

After working quickly to make the conversion, Cedarville took third place overall with Slipstream, but first among the university teams with 154 miles per kilowatt-hour.

The track for the last two years of the competition has presented a unique challenge. The competition takes place on blocked off streets of Houston, Texas. The rules for the competition require each vehicle to travel ten laps around the track at a minimum average speed of 15 mph.

Hedges, who drove GL-II at the competition, said the track for the competition was exciting. “It was really nerve-racking, because I had basically never driven the car before I had to drive it in competition,” she said. “The thought of knowing how much work everyone has put into the car you are about to drive is enough to make anyone’s palms a little sweaty.”

“Whether there is a flat tire, the chain breaks or the car rolls over, there aren’t dull moments,” Michelle Doyle ‘12, the team leader who has been on the team since her freshman year, said.

Sting was disqualified when it went over the time limit on its run. A master cut-off switch near the driver’s shoulder was accidentally tripped during the race, shutting off the motor, which caused the vehicle to come in a few seconds over time. Zavodney said this run would have placed second at the competition because it consumed half the energy of Slipstream.

The new engine in Gold Lightning II, the team’s poster vehicle, had not been completely tuned before the team left for the competition. Because the team had spent all year building this engine, they decided to enter it into the competition anyway. GL-II made a successful run in the competition but only achieved half of the mileage (743 miles per gallon) the previous year’s team had achieved with the old engine.

“I gained a lot of practical knowledge, coming in as someone who knew practically nothing about engines,” Hedges said. “I had a lot of room to grow in that area.”

The future is bright for the HEV team. As the team continues to look at the fuel efficiency issue, they continue to see opportunities for improvement. “There’s a lot of energy in gasoline,” Zavodney said. “The problem is your engine only converts about a fourth of it into useful work.”

Recognizing this problem, Zavodney and the team are working on a new engine design which he believes will achieve 15-20% more fuel efficiency.

Team member Todd Bouws ’13 said, “Everything we do, whether a simple task that we conquer alone, or a large task which we complete with others is all-important in achieving our goal of attaining better fuel economy, and hopefully winning.” The Cedarville HEV program provides unique opportunities to all involved. 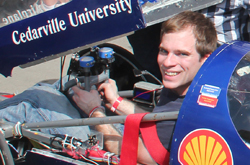 Team member Adam Oakley takes the team's car, Slipstream, to the measurement tent in preparation to go out onto the track.