by Dan Knudsen ’10, as told to Sharyn Kopf

On one hand, you can say my life changed drastically that Friday in March 2007 ... and yet, it didn't.

I’m still a Cedarville student, studying prelaw, looking for ways God can use me to help people. I have the same sense of humor, the same ambitions, the same passion to serve the Lord with all my heart, soul, and strength. I’m just doing it from a slightly different viewpoint.

I wish I could say I broke my neck saving a child from a speeding car or climbing Mt. Everest or doing something equally heroic, but I can’t. All I did was attempt a back flip. That was the day I almost died — physically and spiritually.

But let’s go back a bit. I grew up in a Christian home in a suburb of Chicago, son of Bill and Debbie Knudsen. My brother Matt ’05, sister Jen Kraker ’06, identical twin brother Mike ’08, and I were homeschooled and involved in church, Sunday school, youth group, you name it. I lived the good Christian life because that was just the way things were — until junior high, when I decided to make my relationship with Jesus Christ personal. But it was when I got to Cedarville that I went through the most significant growth in my Christian walk and realized how my relationship with God defines why I do what I do.

Ask anyone, and you’ll discover that besides my love for the Lord, I’ve always been very sports-minded, playing basketball and soccer in high school and getting involved in intramurals at Cedarville. In fact, I came my freshman year ready to participate in anything and everything. I was elected class vice president, joined a discipleship group, and became a member of Theta Rho Epsilon, or ΘPE — a men’s accountability and service organization. By itself, Cedarville is an amazing place to be. Add ΘPE, and my desire to grow in Christ took another step forward.

I also went on my first overseas missions trip, to Germany in May 2005, and loved it. The biggest thing was realizing God outside of America. Seeing Him at work in another country was something I had never experienced before. I gained a global picture of God, and I knew I wanted to do more short-term missions trips in the future.

So, I joined another team that was going to Mexico over spring break of 2007 during my junior year. My group was in charge of all the programming at a camp for missionary kids.

Two significant things happened before that trip, though. One, I was drawing closer to God than I had ever been. I couldn’t wait to spend time with Him and study His Word each day. I was purposefully looking for opportunities to witness. I just wanted to know Him better.

And two, I took a half-semester tumbling class. That’s where I learned how to do a back flip.

We flew down to Puebla, Mexico, ready to spend a week watching God work in the lives of our team and the campers. I served on the activities team and praise band and worked as a cabin counselor. I loved everything about that week.

Every year, there is a talent show on the last night of camp. It was a tradition for five of the male leaders to do a boy band-like lip sync performance, and I thought it would be cool to throw in a back flip at the end. It was Friday afternoon, March 9, 2007, only hours before the show. I went outside to practice the back flip — but something went wrong.

I don’t remember exactly what happened, but I later learned that I had broken my neck between the C1 and C2 vertebrae, paralyzing me immediately and cutting off my air supply. I’ve been told that my friend rushed over, and I mouthed, “I can’t breathe.”

By the grace of God, not only was our team leader a former paramedic, but a doctor was also at the camp that day, loaded up with medical supplies. In total, three paramedics, two doctors, and the camp nurse were on site. They were able to sustain my breathing until the ambulance came, and we then drove the hour and a half to a Puebla hospital. I spent three days there, and then Cedarville provided for a medical flight to Northwestern Memorial Hospital in Chicago. I was at Northwestern for two weeks before being transferred to the Rehabilitation Institute of Chicago, where I stayed for four and a half months.

Before the accident, I didn’t know anything about spinal cord injuries. Everyone in my family had always been healthy. So, in my mind, I just couldn’t wait to get better. I wanted to play drums and get involved in sports again. And though I slowly started to realize how serious the situation was, it still took awhile to sink in. I guess I was numb to it.

I started wrestling with God about what had happened. All my head knowledge of Him remained — I knew this wasn’t punishment and He wasn’t abandoning me, but it still felt that way. When I’d see pictures of myself or think back to before the accident, I couldn’t stop from crying. I asked God, “Why?” I believed I was being an effective tool for Him before, so why would He allow this to happen now? I had no desire to have anything to do with God. In fact, I wanted to punish Him. I did not want to give Him the satisfaction of my time.

Those were dark days, but God never gave up on me. Over time, I could see how patient He was with me. He reminded me of verses I’d known all my life — that He works all things for His good and glory. God brought me out of that dark time, and I slowly began to desire Him again. Though nothing could have completely prepared me, I believe God was working in my heart before the accident to get me ready spiritually.

I realized my injury was in no way a setback but just another step God had planned in my life. Obviously, a lot has changed, and I like to say, “I’m finding a new normal.” But what has not changed is my desire to want what God desires.

Now I’m back at Cedarville, and I can’t say how wonderful it is! They’ve done so much, and everyone has been so welcoming. If people tell me I’ve been an encouragement to them, it’s extremely humbling because I know it’s nothing I did but God bringing me through. Sure, there’s a part of me that wants to just do nothing all day. But God did not create me that way, and I have no desire to waste the life God has given me.

School might take a little longer, but I’m determined to finish. I want to go into family law so I can help people who are going through a divorce and be a light for Christ in a sad, dark time in their lives. I’d also like to be a marriage counselor at my church.

Believe it or not, life is starting to feel normal again. A new normal, yes, but still a life that I will try to use to glorify God. 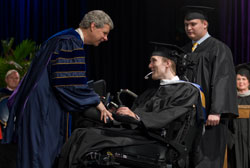 Dan graduated with a prelaw degree in May 2010.