The girls knew they wanted to help individuals affected by the hurricane even before the storm hit. “Both Casie and I are from the East Coast, so we knew that this storm would be pretty bad,” said Crutchfield. “A few days before the storm hit and we just had an idea to go and do something about it.

“We talked to Briana Dupree, the residence director of Faith Hall, about our idea to help. We were just planning on taking our cars and packing PB&J sandwiches. Bri told us that Dean Purple led a team over fall break to do hurricane relief a few years ago,” said Crutchfield. Later that day the girls went to visit Jon Purple, dean for student life programs, and told him about their idea. Purple contacted Samaritan’s Purse, and within hours the girls’ peanut butter and jelly idea had turned into a plan.

“Dean Purple sent out an email and before we knew it over 80 people were signed up,” said Crutchfield. “We only had 14 spots for seven girls and seven guys. Casie, Bethany Sibbitt, the trip’s advisor, and I already took up three spots, so Dean Purple picked the rest of the team using a random selection process. It was amazing. We ended up with an incredible team.”

The team left Cedarville in the afternoon on Wednesday, October 12 and was back in time for curfew on Sunday. The short duration of the trip did not keep the team from accomplishing great things. “I just loved working with these homeowners,” said Sibbitt. “It’s heartbreaking to have to tear down their homes. One elderly lady was living in the home her parents built. But they are so appreciative for the help; otherwise they would either have to do it themselves or hire help.

“Samaritan’s Purse also gives each of the homeowners a Bible that is signed by every volunteer who worked on their home. It’s awesome seeing how God can redeem something so devastating for his honor and glory.”

Danny Kim, a senior broadcasting and digital media major from Asuncion, Paraguay, was working on one of the houses the team gutted when he saw the homeowner outside weeping. He spoke with her and asked her to share her story.

Throughout the past four years, she had developed breast cancer, had back and hip surgery and was forced to walk with a cane. Her husband had also developed two different types of cancer. After all their health struggles, the flood came and destroyed the couple’s home and possessions.

“As she was telling me this story, I was so heartbroken to see her crying and grieving over her loss. I wanted to comfort her and pray for her,” Kim said. “A Samaritan’s Purse chaplain came over and presented the gospel to her, and by the grace of God she came to know the Lord! We sang, prayed, and rejoiced together as we welcomed her to her new family. “That one moment was worth all the hard work.” 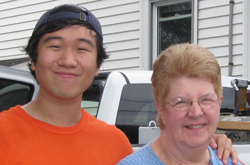 Danny Kim, a student who helped those affected by Hurricane Irene, was able to pray with one of the homeowners when she received salvation. Photo supplied by Bethany Sibbitt