“The Past is the Key to the Future.” This was the theme for this year’s Geological Society of America (GSA) annual meeting and exhibition. Cedarville students and faculty attended the meeting in Minneapolis, Minn. on October 9-12.

Each year the GSA meeting is held in a different city and attracts over 5,000 scientists and educators from around the world. The attendees are able to learn about new research in the field of geology as well as present their own findings. The meeting features technical sessions where geologists present their research, short courses to educate students, teachers and professionals and field trips spanning many different geological topics.

In addition to attending the meeting, Cedarville students and faculty also presented research to their fellow scientists. Students are rarely granted the opportunity to present research and must rigorously prepare for this professional experience. Important professional opportunities are part of the new geology major, started in 2009. The major allows students to gain real-world experience by performing research locally or taking summer trips to places like the Grand Canyon, Wyoming and Southern California.

Two senior geology majors, Matthew Emery and Sarah Maithel, were able to present their research in Minneapolis. They presented theoretical research on compaction in the Coconino Sandstone in the Grand Canyon. They studied the compaction of sandstone and its result on the bedding angles, and they concluded that the bedding angles in sandstones should be very close to the original angles. They plan to publish a paper with John Whitmore, Ph.D., professor of geology, about their research.

During the conference, Whitmore and Steven Austin, Ph.D., adjunct instructor of geology, also presented research. Whitmore presented research that he is completing on the Coconino Sandstone in the Grand Canyon. During this past summer’s field season, he found unusual contorted rock layers in the sandstone, implying that a large amount of water was present during the sandstone’s formation. In addition, he presented research with Paul Garner, a British geologist. The two scientists have cataloged over 40 locations where sand waves, or underwater sand dunes, have occurred. They have found sand waves around the world, including Long Island Sound and San Francisco Bay, some of which are over 50 feet high.

Austin has researched geological elements in six out of seven continents, which gives his presentations a global influence. Based on his measurements and calculations on the Santa Cruz River in Argentina, he concluded that one or more mega-floods helped form the geology of the region. This is the first mega-flood that has been identified on the South American continent.

Whitmore led the GSA trip along with three faculty members and eight undergraduate geology students. Before the conference, faculty and students attended the St. Anthony Falls Sedimentology Laboratory with over 40 other geologists. Water from the Mississippi River flows through the lab, allowing scientists to study ripples, deltas, landslides and more. Students had the opportunity to study the lab’s models in order to learn more about the Mississippi River delta.

More information about the presentations is on display in the Engineering, Nursing, and Science Center (ENS) on campus. 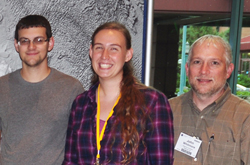