Help Is on the Way

“Life is an experience you build on,” said Jeff Subra ’83, and he follows his own advice. A metal fabricating business owner in Buffalo, New York, Jeff is also a volunteer firefighter and critical care emergency medical technician (EMT) living in Schroon Lake. He is in his final semester at North Country Community College to become a registered nurse. Not bad for a man who used to wince at the sight of blood.

In 2006, Jeff’s son, Zac, invited his dad to join him in firefighter training. “I wanted to support Zac and his energy for community involvement” Jeff said, “and he introduced me to another world.” Through his training and subsequent volunteer service at his local firehouse, Jeff met several volunteers who encouraged him to expand his training with EMT classes. Jeff’s wife, Cheryl (Schuler) ’83, completed the training with him, and then Jeff went on for certification as a critical care technician.

“We live near Interstate 87, the Adirondack Northway, which is the main highway linking Albany and Montreal,” he said. “We often get called out for accidents. One accident involved a car that hit a moose, which crushed the roof of the car, trapping the driver and requiring extrication. I learned that in those critical situations, I could handle a lot more than I thought and make an actual life-or-death difference in my own community.”

Jeff’s EMT experience put him in touch with emergency room nurses at local hospitals, and as a result, he decided to further his training to become a nurse. His class of 18 students includes traditional college students as well as others like him who are discovering the numerous opportunities in the health care field. “Education is critical,” he said. “You never outgrow it. If you can keep building on your skills, you never know how God will use you to help people in need.”

Jeff’s interest in health care is leading him toward his ultimate goal — medical missions. He followed up a 2010 international health care ministry trip to Haiti with nine days in Honduras this past January. Both experiences impressed upon Jeff the clear link between poverty and limited access to basic health care. Jeff’s team of medical students in Honduras treated 1,500 patients in two temporary village clinics. Most patients had no means to travel for basic medical care much less the financial resources to afford treatment.

Beyond limited access, Jeff saw the effects of poor health education. Basic health needs that go untreated grow into painful conditions that are difficult and expensive to treat. “We saw patients who probably had never owned a toothbrush and had definitely never seen a dentist,” he said. “One woman had to have all of her remaining teeth pulled. That hardly seems like a blessing, but to her it was — she can finally be fitted for dentures, which are relatively inexpensive in Honduras.”

Jeff’s heart was particularly moved for the children whose already meager circumstances are compounded by illness and disease. One day as he used materials at hand to make surgical glove balloons to entertain the children, he noticed a young girl hanging back and watching him. “Most of the children had surrounded me, reaching, grabbing, and yelling in Spanish for my next poor excuse for balloon art,” he said. “But this girl caught my attention. Her shyness and reservation were distinctly different from the others. My broken Spanish was lame at best, but it was obvious from her smile that this young girl understood my genuine attempt to let her know that she was noticed and appreciated. During that short exchange, God reminded me that my testimony among unbelievers needs to be patient and loving, not overpowering or demanding. I scanned the huge crowd of people waiting for their moment of basic medical attention, and I tried to hold back a flood of emotion as I realized we were making an impact by simply being there.”

Jeff plans to seek more opportunities to volunteer with medical missions teams, and he is gaining a broad base of training and education so he can be of service. “When I see people in immediate need, it’s satisfying to know I can help,” he said. “While our human efforts do not always allow opportunities for us to see a spiritual response, I believe God allows these experiences to tap into our core, showing us in a simple way what making a difference is all about.” 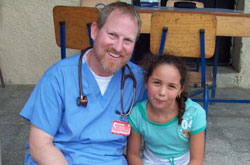