This is the 10th year that the University has competed in ACM’s East Central North America Regional Contest. Regional rounds began in September and will continue through December. The top two teams of each regional contest have the opportunity to participate in the world finals in Warsaw, Poland May 14-18, 2012.

Cedarville placed 15th among 122 collegiate teams that represented 60 colleges and universities in the region. Two, three-person teams traveled to the contest. The six students who competed were David Riggleman, Stephanie Russell, Ethan Peterson, Matt Schoenwald, Danny Andrews and Brian Russell. Professors recruited the students based on classroom observation and performance.

The goal of the contest is to complete nine complex problems within a five hour time period. Each team is given a work space with a single computer to work on. The team that answers the most problems correctly in the shortest amount of time wins the contest.

“The questions designed … are not just mathematical or scientific equations; they incorporate the complex real-world challenges that we face every day,” says Salvatore Vella, vice president of architecture and technology at IBM Software Group.

Russell said “this competition encourages thinking on your feet and problem-solving skills. It was a fun and intense experience, and I felt challenged and motivated to improve my knowledge of algorithms and their efficiency.”

David Gallagher, Ph.D., professor of computer science, helped prepare the students by holding three practices before the contest. Going into the contest, the main goal of both teams was to honor God in the way that they conducted themselves. Learning how to keep a three-man team organized during the contest and dividing up individual roles were the main things that the teams practiced. 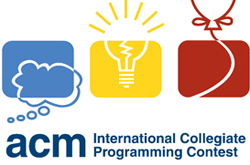 The main goal was to honor God in the way that they conducted themselves — secondly, to keep a three-man team organized during the contest and divide up individual roles. Graphic courtesy of ACM International Collegiate Programming Contest