The Cedarville University Center for Political Studies welcomes Karl Rove to campus Tuesday, September 20, 2011 at 7 p.m. for Constitution Day. Rove will speak on the topic 2012: Choosing Our Future. The event is cosponsored by the Young America’s Foundation and News Talk Radio WHIO.

The event is open to the public but registration is requested. Tickets are free to pre-registrants and $10 at the door for non-registrants.

Rove served as senior adviser to President George W. Bush from 2000-2007 and deputy chief of staff from 2004-2007. He now writes a weekly op-ed for The Wall Street Journal and is a contributor to Fox News.

Before he became known as “The Architect” of President Bush’s 2000 and 2004 campaigns, Rove was president of Karl Rove + Company, an Austin-based public affairs firm that worked for Republican candidates, non-partisan causes and non-profit groups. His clients included over 75 Republican U.S. Senate, Congressional and gubernatorial candidates in 24 states, as well as the Moderate Party of Sweden. 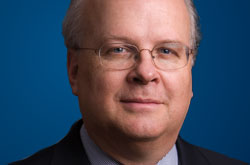 Karl Rove will speak at Cedarville University on September 20 at 7 p.m. Photo courtesy of the Young America’s Foundation