Karl Rove, known as “The Architect” of former President Bush’s 2000 and 2004 campaigns, addressed approximately 2,000 guests during his presentation at Cedarville University on September 20. Rove was invited by the Center for Political Studies in honor of Constitution Day and spoke on the topic “2012: Choosing Our Future.”

Focusing on the upcoming election, Rove said that the “2010 and 2012 elections may be the most consequential in our history.” He outlined the economy and health care as the two major issues for the 2012 election, stating that “behind every number is a person.”

“A successful nation is based on limited government, low taxes and the ability of people to work hard and realize their dreams,” Rove said. “There should be a limit to what the government can take from any individual.”

Discussing his first-hand experience with President Bush during September 11, his days at the White House working as senior advisor and deputy chief of staff, and his opinion on the upcoming elections, Rove gave the audience a brief overview of his political career and what it is like to work in Washington.

“It was an incredible opportunity to hear from someone intimately connected with the executive office,” said Emily Tomlinson, a senior history major who attended the event. “I got a little glimpse of what it actually means to run the country.”

Rove encouraged students to get involved with politics, and his advice was to “decide what your passion is, go do it and go where you want to be.”

“Events like these get students involved in the real world and make us get out of the ‘Cedarville Bubble,’” said Caleb Klay, a junior history education major who attended the event. “It’s really important to have Christians involved in politics, and events like these spur interest to make America a better place through our government.”

Mark Caleb Smith, Ph.D., director of Cedarville’s Center for Political Studies, opened the evening by saying that one of Cedarville’s goals is to educate young men and women and equip them for the future. “Part of that education is to bring people to our campus who are able to share their expertise or their unique experiences with our students and community,” Smith said.

Rove challenged the students to accept the responsibility they have as citizens.

“You have a responsibility, not just as young people, but everyone, to love our country and serve her in any way we can,” he said. “Regardless of where you are, you have a duty to be involved.” 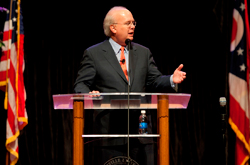