For Cedarville alumna Kim Gall ’78, sports have always been a major part of her life. More importantly, she sees the potential that athletes have to change the world for God’s Kingdom, making sports more about life than games. Now, as the recently appointed athletic director at Geneva College in Beaver Falls, Pennsylvania, Kim, who majored in physical education at Cedarville, has an even greater opportunity to see that vision realized.

“We believe the student-athlete can experience personal growth as well as growth in skills and knowledge of a sport through participation,” Kim said. “With quality leadership and with intention the student-athlete can also continue to develop virtues such as patience, honesty, courage, charity, and stewardship. Consistently displaying these in one’s career and life can certainly help in transforming society for the Kingdom of Christ.”

After graduating from Cedarville and earning her master’s degree from the University of Dayton, Kim joined the faculty at Geneva College in 1980. Over the next 14 years she served as an instructor, women’s basketball and tennis coach, and women’s athletic director. She left Geneva to earn her Ph.D. at The Ohio State University and then spent the next decade working at Calvin College in Michigan before God led her back to Geneva in 2008.

A comprehensive Christian college of the arts, sciences, and professional studies, Geneva is a founding member of the CCCU and is located northwest of Pittsburgh. While a coach at the college, Kim received the NAIA District 18 Athletic Administrator of the Year Award twice and was named the District Coach of the Year in tennis three times and in basketball once.

As Geneva’s first female athletic director, Kim knows she has challenges ahead. But her main hurdle haunts almost all athletic directors — having enough money in the budget to implement all the sports programs they want. “There are often challenges related to what is fair and equitable in terms of budgets across the range of sports and in salaries as well,” she said.

From a female perspective, Kim’s experiences during the early days of Title IX certainly had an impact on how she views sports today. She sees how the sport culture — and Christian higher education as a whole — are still largely male-dominated environments, and she knows she may face different expectations from her male athletic director counterparts at other schools. But she also sees her new position as an opportunity.

“I view athletics as an important part of the total college education environment,” Kim said. “Athletics support the mission and vision of the college. We want our student-athletes to become servants and leaders who transform society.”

Kim credits much of her success to several Cedarville faculty members, and she has many fond memories of her years playing college basketball, field hockey, and softball. Three professors, who also served as her coaches, had a major influence on Kim’s life and work: Dr. June Kearney, her academic advisor and softball coach; Dr. Maryalyce Jeremiah ’65, her basketball coach; and Dr. Pam (Diehl) Johnson, who coached field hockey. “I was blessed to have these three intelligent and competent professional women as my role models,” said Kim.

Though Kim still enjoys many sports, basketball and softball are her favorites. She shares a home with her cat, Milo. You may e-mail her at kgall@geneva.edu. 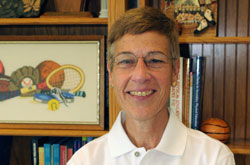 Recently appointed to a prestigious position as an athletic director, Kim Gall ’78 has got game. Photo courtesy of Geneva College.