Second Lieutenant Joshua Tucker, a 2011 criminal justice graduate, recently received the Marshall Award. Honored as the top cadet in his detachment, Tucker was invited to attend a leadership seminar at the Virginia Military Institute, Marshall’s alma mater. There, the award winners learned about Marshall and his principles of candor, commitment, courage, integrity and selflessness.

“I greatly enjoyed the seminar and learned about leadership and how to use that leadership in the greatest fighting force in the world,” said Tucker. “Hearing directly from our nation’s leaders was an experience I will never forget.”

The Marshall Award is named in honor of General George C. Marshall, a five-star general. Marshall served as the Army Chief of Staff as well as Secretary of State. His European Recovery Plan, also known as The Marshall Plan, helped Western Europe begin to recover from the war and led to his winning the Nobel Peace Prize.

Winners of the Marshall Award are selected based on various achievements such as scholarship, leadership and community involvement. Cadets from ROTC units throughout the nation were invited to attend the prestigious, three-day seminar in Lexington, Virginia. 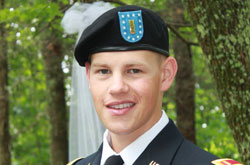