Senior nursing student Kailey Tyson has always had a heart for medical missions. Her mother heard about Mercy Ships when Tyson was 13, and she’s been praying about going ever since.

Mercy Ships is an organization that has operated hospital ships in developing nations around the world since 1978. Their ships are equipped with operating rooms, intensive care units, recovery wards and staff lodging. Their goal is to bring hope and healing to the world’s forgotten poor.

Recently, Tyson volunteered on the ship Africa Mercy as a general steward all day and worked in the hospital during her free time. She was also paired up with a local worker from Sierra Leone, a woman named Sama. “She worked with me from eight to four and then she would take me around the country. We went exploring, to the beaches and into town. I met her family and learned to cook her local foods,” said Tyson. “It was so fantastic to get to really see and live in the culture.”

When crew members arrive on ship, their blood type is tested and recorded. Instead of storing units of frozen blood and warming them when needed, crew members are simply paged when their blood type is required, and they donate blood minutes before the patient uses it. The ships aren’t set up to do emergency surgeries, and this method works well for routine operations.

Sometimes, however, something goes wrong. One day, Tyson was paged to the lab to donate her blood. As she was being prepped to donate, she was told that there was a little boy dying on the operating table because an artery had burst in his leg; he was bleeding to death and only had about 10 minutes to live. The process of drawing blood can take up to 45 minutes, but this boy didn’t have that kind of time. “We all began praying and beyond all human reason,” said Tyson. “My blood completely filled the bag in five minutes.”

Tyson quickly scrubbed up and rushed into the operating room with her unit of blood. “I got to pray and sing to him while he cried,” she said. She watched as her life-giving blood drained into his dying body. Suddenly, she recognized the boy. His name was Osman, one whom she had played with in the recovery ward countless times; a boy due to go home in just a few days.

Osman’s leg had to be amputated, but he lived. Tyson was assigned him as a patient and was blessed to watch him heal. “I went to Africa thinking they needed me,” she said. “But I realized that I needed Africa.” 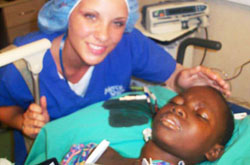 Senior Kailey Tyson volunteered on the ship Africa Mercy, where she was able to see the direct life-saving effects of donating blood. Photo provided by Kailey Tyson