Owl City is the musical creation of artist Adam Young. Young’s popularity can be attributed directly to the Internet, and specifically Myspace, where his songs became an almost overnight hit. Young began writing songs when he struggled with insomnia during this same time.

Young spoke candidly during the concert about his thankfulness for his current success. He mentioned dropping out of college and working to load Coca-Cola trucks before his Internet stardom.

Young’s other musical endeavors include Port Blue, the acoustic project Sky Sailing and the precursor to Owl City, Swimming with Dolphins.

Owl City was joined in concert by the new pop band Days Difference. 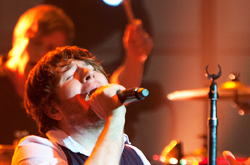