Parzheen is a Kurdish girl who was born with a heart defect that doctors discovered a few months after she was born. Her heart condition took away her energy to move, play and laugh like other babies. She waited five years to receive treatment and was given a new chance at life in 2011 through an organization that reaches out to Iraqi children.

Cedarville University’s Student Government Association (SGA) is partnering with the nonprofit Preemptive Love Coalition to bring lifesaving heart surgery to the children of Iraq like Parzheen. On November 18, 2011, students donated over $15,000 to the organization.

The Preemptive Love Coalition exists to eradicate the backlog of 30,000 children that are waiting for heart surgery in Iraq through training local Iraqi heart surgeons and nurses. The organization was founded in 2008 by Cody Fisher, ’06, and Jeremy and Jessica Courtney.

Due to chemical agents, depleted uranium and malnutrition, children in certain cities in Iraq are born with congenital heart disease (CHD) at rates ten times higher than world norms, and they are unable to receive proper treatment due to an inadequate medical infrastructure. Three thousand children are waiting for lifesaving surgery in the northern Kurdish Region, and 11,000 children throughout Iraq are added to the backlog every year.

The Preemptive Love Coalition has responded to this need by training pediatric care teams throughout Iraq and by hosting Remedy Mission trips. The Remedy Mission is a two-week surgery and training marathon for Kurdish and Arab doctors, nurses and technicians.

“These missions are training doctors just as much as they’re saving lives,” Fisher said. “As a result of that training, lives will be saved even after we leave.”

Fisher said that his life took a radical turn when he began to understand the heart of God, and he said that one of the most pressing issues for this generation is how we will respond to those we believe are our enemies.

Fisher said that he often speaks of Cedarville University in Iraq and of how students are raising money to save Iraqi children.

“Cedarville is actively loving in the name of Jesus, and it’s tearing down barriers of fear, stereotypes and misunderstanding,” Fisher said. “Cedarville has permanently changed how many Iraqi Muslims view American Christians.”

Sarah Brittan, a senior at Cedarville and the philanthropy director of the SGA, said that the Preemptive Love Coalition is the very essence of reconciliation.

“Supporting this ministry allows Cedarville to be a part of the remedy—to be the hands and feet of God,” Brittan said. “Cedarville believes in impacting every aspect of the world for the cause of Christ, and that is what the Preemptive Love Coalition is to us: a picture of selflessness and love.”

Brittan and the SGA hope that students will desire to be a part of this reconciliation process, whether through donating money or through prayer.

“We also want there to be an awareness of how Americans can help in what seems like a hopeless situation—a situation that we have contributed to,” Britain said. “We hope students are encouraged as they see what God is doing through a fellow Cedarville graduate and to recognize the potential that we have to help and to ultimately follow his example.”

Cedarville students hope to raise $30,000 this year in order to sponsor a Remedy Mission with the potential of saving anywhere from 18-25 children’s lives. 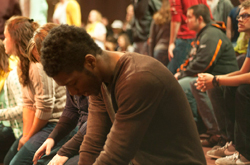 Students prayed for the children who will be receiving the heart surgery. Photo credit: Scott Huck/Cedarville University