Kids know not to drink and drive. They’re taught to say “no” to drugs. They’ve heard a million times that smoking will kill them. But nobody thought to tell them that using grandma’s prescription medications could be fatal.

Maybe that’s why death caused by prescription drug abuse or misuse is the number one cause of accidental death in the state of Ohio, even surpassing deaths caused by motor vehicle accidents.

“Years ago we taught first, second and third graders how to stay out from under the sink so that they didn’t drink liquid Drano and other chemicals,” said Jeff Lewis, Pharm.D., associate dean of the Cedarville University School of Pharmacy. “The idea of training them to tell the difference between medicine and candy wasn’t on our radar screen.”

It’s not just a danger for children. Teenagers and adults are getting addicted to prescription medications that they mistakenly believe are safe because they were originally prescribed by a doctor. Prescription narcotics are more easily accessible than ever before, and people are taking advantage of them.

Cedarville University pharmacy students will be educated about the prescription drug abuse problem and what they can do to combat it. “We’re going to be training our students how to effectively manage addicted patients,” said Lewis, “in terms of the social-behavioral issues and the medicines that are being used for addiction management, and how to work with physicians and nurses to effectively wean a patient off of the addictive medicine—so that they can become full contributors to society and get rid of the burden that they carry.”

Cedarville recently hosted a pharmacy camp for high school students interested in pursuing pharmacy as a career. “We had a chance to go for ice cream and play golf and go to ropes courses and all kinds of fun things,” said Lewis. “But more than that, we spent a lot of time in various laboratories learning about the profession of pharmacy. We did lots of really cool things to help these students take pharmacy for a test drive.”

One of the things the week focused on was the epidemic of prescription drug abuse and the deaths associated with it. The students each prepared their own materials to take to the elementary schools in their communities to teach kids about the problem.

According to Dr. Thomas Frieden, director of the Centers for Disease Control and Prevention (CDC), just about the only mortality statistic that is getting worse is death from prescription opioid abuse. Even mortality rates in heart disease and cancer are declining.

“When I look at that as a faculty member, as a pharmacist in practice,” said Lewis, “it’s clear that our program in pharmacy here at Cedarville must be significantly involved in training our students to address this topic.”

Those interested in having a member of the Cedarville team visit their school or community group can contact Dr. Jeff Lewis. 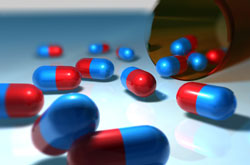 It’s not just a danger for children. Teenagers and adults are getting addicted to prescription medications that they believe are safe. Photo credit: Richard Dunstan/Personalfx