Dr. Mark Caleb Smith was granted tenure by the Cedarville University Board of Trustees and was promoted from assistant to associate professor of political science.

Smith came to Cedarville after earning a Ph.D. in political science from the University of Georgia. He also previously taught at Tulane University and Calvin College. Smith has been an exemplary educator during his six years at Cedarville, regularly scoring among the best in the University on his student evaluations.

In addition, Smith is a go-to source for local and state news outlets regarding political developments due to his role as director of the Cedarville University Center for Political Studies.

Smith serves as lead professor of the Politics and American Culture general education course required of all students at Cedarville. He is extensively published and is currently working on a book chapter focusing on the Christian Right in Southern politics with a friend and fellow political scientist at George Mason University. Beloved by students and respected by colleagues, Dr. Smith is a mainstay in the department and we are grateful to have him. 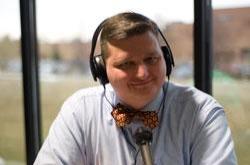