Queen of the Lake

Sometimes I think my entire engineering education can be summed up into conserving tape. To be a truly good engineer, you have to know where you can skimp on tape and where you need to reinforce. I’ve been in a number of engineering competitions where this has been a chief skill — I just wish it looked better on my resume.

Every year at homecoming, engineering freshmen compete in a cardboard canoe race across Cedar Lake. The race has become so popular that the competition has been opened up to other groups on campus. The only materials participants are given to build a canoe are 40 feet of cardboard and a single roll of tape. The tape is easy to put on but not so easy to take off.

My freshman year, the canoe race was pretty stressful. My team spent about 30 hours building our boat. I don’t remember how it placed, but it made it across the lake.

The Centennial Library’s team was not as fortunate, sinking almost immediately. As a library worker, it was up to me and my co-worker, Aaron Ikehara ’09, an electrical engineering major, to reclaim the library’s honor the next year.

How to Build a Better Boat

We started by implementing ideal design features: shorter sides and a wide bottom. Our main goal was to reduce the sink depth of the boat so it would almost glide on top of the water. The library had the fastest boat in the water that year but failed to claim the “King of the Lake” title — given to the last surviving boat at the demolition derby. The library claimed the trophy, but almost no bragging rights.

During my junior year, we used a similar design and added more library workers to our building crew: Nate Dolan ’11, a mechanical engineering major, and Michael Cox ’11, a physics major. Michael rowed across the lake with senior nursing major Rachel Latario ’10. We recaptured the trophy as the fastest department boat, but once again our boat did not capture the “King of the Lake” title, though we came in a close second.

As a senior, I felt it was imperative to keep the library’s winning streak alive. The library employs many science and engineering majors, which — rumor has it — is for the sole purpose of defending the title. Imagine the shame of losing to a bunch of freshmen and liberal arts majors: Dr. Robert Chasnov, professor of engineering, and my engineering classmates would never let us live that down.

Once again, Michael, Nate, and I worked on the design. Nate handled the calculations, and I supervised the less-technical team members responsible for manufacturing, which meant properly allocating the tape. We cut the tape in 3- and 4-inch strips, and then we cut each strip in half. One of the things I love about building the library boat is that the whole staff gets involved. Each person has his or her own particular way of cutting the tape and loves to come up with ways to make things easier. It’s a good team, and they think like problem solving engineers. Knowing this was our final chance to lead the canoe construction, Nate, Michael, and I focused on passing down the canoe-building traditions and solid designs we’ve used. We hope they will continue the tradition for years to come.

How to Race a Cardboard Canoe

It’s Friday: race day. Our boat is significantly smaller than the other contenders, but I feel relaxed and confident that we will make it across with a competitive time. It took 30 hours to build my first boat, and we built this one in six hours — we have this down to a science.

Valentina Blackburn ’12, who has rowed for the library twice before, takes the back position and navigates the canoe. We brief her sister, newcomer Vawny Kaye Blackburn ’13, on how the race will go.

First, you line up on top of the hill by the Stevens Student Center where you can see the race, but as you approach the docks, you’re in the heart of the action, and the pressure starts to build. As you advance in line up to the sidewalks, you put on your game face. Your rowers put on their life jackets and hand over their valuables; if the canoe goes down, watches and cell phones won’t.

One final time, I prep the team with the plan, and then it’s time to go. Vawny Kaye is the first one in. I worry about the crossbeams and skin. If her foot punctures the skin, the boat will sink before it travels five feet, and this is the first real test of the boat. It’s a clear indicator of how strong or weak the boat actually is. Valentina boards the canoe with ease, and after some last-minute adjustments, I hand the team their paddles. At the sound of the starting gun, they’re off.

I know there’s math and science creating the logic that supports our design, but as I watch our boat glide across the water, I instinctively know: it’s magic. Walking around to the other side of the lake, I see the full-time library staff has come out to cheer and support our team. Our boat beats us to the finish line, a good sign.

Valentina tells me the news — we’ve won! We smile for the cameras with our canoe, but it’s not over yet.

How to Sink the Competition

As we prepare for the demolition derby, I warn the team. The sides on our boat are three to eight inches shorter than the rest. If another boat rams our sides, we will sink. Another danger I know from experience: freshman teams target the library boat.

I tell myself that when the boat goes down — and it eventually will — it will have done so honorably. The gun fires, and we race to get the rowers into the boat.

Last year, we were so close to victory in the demolition, but we weren’t able to withstand the onslaught of every other freshman boat. As I watch our team, I’m amazed at their canoeing ability. They understand how to sink other boats: side corner shots are better than head-on, and they don’t lose their cool. More than once, I think the fight is over for the library, but the Blackburn sisters are tough competitors. And they win!

My brother, Doug Conway ’07, a mechanical engineering grad, calls after the race and asks, “So, where did it fail?”

The canoe hung tough, handled well, and returned to shore. This year, sweet victory earned the library the trophy and finally that coveted title, revised slightly for us, “Queen of the Lake.” 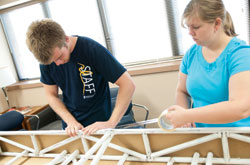