Shortly after 3 of the 4-man team walked across the stage at Cedarville University’s 2010 commencement ceremony, Brandon Tress, Justin Hoffman, Michael Beight and Sammy Starr celebrated their record-breaking race in Louisville, Ken., complete with the baton from a memorable graduation.

On May 1, Cedarville’s commencement speaker, Dan Cathy, president of Chick-Fil-A® Inc., offered each graduate a silver baton as an allegory encouraging them to continue living in God’s Word: "Graduates, I just want to encourage you not to drop that baton." The runners were so thrilled by the track reference in Cathy’s speech that they took his words literally, all the way to Louisville and the winning record.

Graduates Michael, Brandon and Sammy had been running together as a 4x4 team throughout their entire college track careers and this was one of their last chances to break the school record set in 1975 as they wrapped up their last spring track season. As the race progressed, each team member ran a personal record for a combined time of 3:12.47, crushing the held record by nearly 3 seconds.

"We knew we had a good chance at the old school record," says Michael Beight, the third runner. "But we also knew we would have to run really well for this to happen. On a good day, three of the four athletes will run well. All four running well? Happens every once in a while. All four athletes running their absolute best on the same day?" He laughed. "Maybe in the movies." 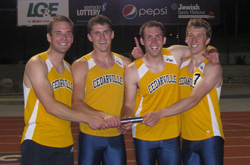