A group of Cedarville University electrical and computer engineering students charted new waters during the 2010–2011 academic year. The team built a robotic boat that was entered in the 2011 RoboBoat competition in Virginia Beach, Virginia.

The June competition required students to build a small, autonomous watercraft capable of navigating a water course consisting of colored buoys and channel markers. The competition is sponsored in part by the Association for Unmanned Vehicle Systems Foundation and the Office of Naval Research.

The competition requires students to build a computer-controlled boat that can make human-like decisions on its own. “Throughout this project we saw that what we take for granted, is actually quite a difficult thing to program,” project leader Timothy Swanson said. “Whenever we see a tree, we know it’s a tree and can tell how far away it is. With a computer it is much harder.”

Cedarville’s entry was a pontoon platform built out of PVC pipe. The boat boasted a high-end webcam for buoy detection as well as an electronic compass to keep the boat on course. All decisions were made by the onboard laptop computer, which was programmed by the students.

The students had to work quickly to solve a few problems that arose at the competition. On the day of the competition, Cedarville performed their first qualifying run on the course. This run was not counted since the boat was over the weight requirement by about four pounds. The team had to work to shave some weight in preparation for a second early morning qualifying run the next day.

Each team is required to remotely control their vehicle from the shore. When the Cedarville team had difficulty doing this, they had to act quickly to figure out the source of their problem.

“Many hours were spent troubleshooting when we finally found out that our remote control was on the same frequency as many other communications systems around Virginia Beach,” Swanson said.

This forced the students to work quickly to integrate a new spread spectrum radio system into their boat.

After a second qualifying run in which the boat successfully navigated through four gates autonomously, the team was awarded a Rookie Honorable Mention Award and a $500 cash award for their first-year performance.

“I’m very excited by the way that this team worked together while at the competition to solve a number of problems that came up. They gained valuable engineering experience that will help them next year and in their future careers,” team advisor Dr. Timothy Tuinstra said. 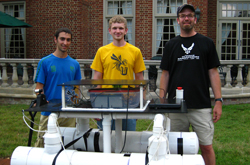