Cedarville University admissions counselors have unveiled a new technology that allows them to better connect with high school students. They’re using special pens that transmit data instantly, allowing students to get follow-up information after college fairs up to three weeks earlier than before.

Teenagers like information fast, and in a form they’re comfortable using. Mark Weinstein, director of admissions, understood this and began looking for ways to connect with students even faster and more efficiently. “I wanted to use technology to capture names of prospective students more quickly than previous years so that we could begin communicating with them about Cedarville,” he said. “Initially, I was thinking about purchasing iPads or tablets for the counselors to use when they travel to college fairs.”

Weinstein took the idea to the information technology department, who in turn showed him the new smart pen technology from a firm in Dayton called ExpeData. “We are definitely the first college among the Council for Christian Colleges and Universities (CCCU) to unveil this new technology,” he said. “I loved the idea because I thought it would allow us to meet my goal of capturing data in real time without the limitations that tablets or iPads would create.”

Rebecca Hayes, director of enrollment services, has already seen a difference in productivity with the new technology. “Before using these pens we would have to wait for the admissions counselor to return to campus, sort through the cards and then deliver them to us,” she said. “Some of our counselors are on the road for several weeks, so it may have taken a month or more for us to be able to follow up with a prospective student. Now, we have the students’ information the day after the college fair.”

Katie Lausten is an admissions counselor for Cedarville. Recently, she traveled to Florida to meet prospective students at college fairs. “I really played up the cool factor to students,” she said. “I would say ‘They’re called Smart Pens, but I call them Magic Pens.’ They thought it was the coolest thing in the world. Many kids actually left and brought friends over so they could use them too. They thought more highly of Cedarville because it shows that we take technology seriously. Kids came up to me and said, ‘Hey, is this the school with the cool pens?’”

While the technology behind these pens is advanced, the execution is simple. The pens write with normal ink on normal paper just like a normal pen. The difference is that the paper is printed with a complex series of micro-dots so small that they simply appear as a grey background to the viewer. The pens are equipped with a tiny camera that records which dots are touched by the handwriting, and when the data is transmitted to the computer, a handwriting interpretation program “translates” the data into a digital duplicate of the information.

“I have been so pleased with the teamwork it has taken between different departments on campus to make this work,” Hayes said. “This project would not be nearly as successful without all of us working together. 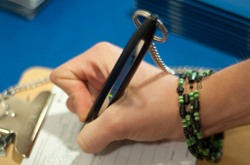