The 2011 challenge, held in Cedar Falls, Iowa, lived up to its reputation for providing tough competition. A hard-fought duel in the endurance race and a solid run in the sprint competition sealed the victory for Cedarville by six points, an extremely small margin from a possible 1,000. Cedarville claimed the final victory over the University of New Orleans, the 2010 winner.

Solar Splash provides the competitive environment for students to apply their research and coursework to work on a boat that harnesses renewable energy while withstanding the rigors of racing.

During the event, 22 teams from across the globe earned points in seven categories. Boats are scored on their appearance and construction through technical reports, visual displays and workmanship. The pinnacle of the competition begins by testing each boat’s operation and performance where it counts: on the water.

Events on the water begin with a sprint and a maneuverability qualifier. The Solar Slalom is next, requiring the boats to weave in and out of markers so the driver can showcase the boat’s speed and maneuverability. The final days of competition are focused on endurance and sprints.

The endurance race tests efficiency and consists of two two-hour heats, with the goal of traveling as far as possible. The sprint event is a 300-meter dash, designed to test speed.

The endurance race was one of the most dramatic events of the competition. In the second heat of the race, Cedarville’s boat was in a tight race for the finish with the boat from the University of New Orleans. The other boat eventually overtook Cedarville’s and won the race, at least temporarily.

During the race Cedarville’s boat was contacted twice by the boat from the University of New Orleans. At the end of the race, two fouls were assessed to the other boat, giving Cedarville the victory in this particular event.

After the event Captain Tyler Smidt spoke to the judges and asked them to consider taking back the penalties or even splitting them between the two schools. The team did not want the race to be decided by something as nebulous as making contact. In the end the judges rescinded both penalties, which gave the trophy for the race back to the University of New Orleans. Several of the judges were surprised that a team would make such a request in order to see a competition judged fairly. The character shown by the Cedarville team earned them the event’s sportsmanship award.

Cedarville finished third in the sprint event. It also placed first in the qualifying event and in the technical reports competition, as well as third in slalom and second in visual display. The team also received the outstanding workmanship award.

Much of Cedarville’s success comes from building on the work from previous years: “Each year we don’t start from scratch,” Dewhurst said. “We always ask ourselves: what can we do that will really improve our boat?”

This year’s success came as a direct result of the work from the previous year’s team. The 2009-2010 team began developing a custom motor for the boat, but never succeeded in getting the motor to work completely. The 2011 team took the concepts and work already put into the motor and finished its development. This work, according to Dewhurst, contributed to Cedarville’s success at the competition.

At the beginning of the year, students are assigned a particular aspect of the boat to focus on. The students must research and educate themselves, while completing regular progress reports. It is this rigorous work that will prepare these students for the job market.

“The whole school year is spent in preparation for the event,” Smidt said. “Seniors devote the majority of their schedule to their senior design project, and for five of us, the solar boat was our job.” Fall work is focused on planning, research and other initial design work. Once spring hits, the students begin manufacturing prototypes for testing and design purposes, all the while looking toward the competition in June.

Cedarville’s team competed in the Netherlands in 2006 and finished in second place. Dewhurst hopes to see the group return to the Netherlands to compete in the DONG Energy Solar Challenge in July 2012. 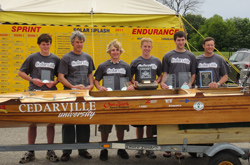