Sports Journalism: Bringing Lessons in the Classroom to Reality on the Field

Working in the newspaper industry for 22 years as a sports writer, copy editor, page designer and sports editor, Jeff Gilbert, assistant professor of journalism, is teaching a course in sports journalism. His extensive background enables him to bring relevant issues to the classroom and equip students with skills needed to cover a game. “When the game’s over, you don’t get to go home. Your work is just beginning,” Gilbert said.

The class recently attended a Dayton Dragons minor league baseball game and worked alongside professional broadcasters, photographers, videographers and journalists. Students interviewed, photographed and filmed the baseball players during and after the game, using the skills they learned in class.

“Going to games, shadowing professionals who are in the industry and getting to do the work yourself really gives you a feel for what life is like as a sports journalist or photographer,” said Joel Pfahler, a junior broadcasting and digital media major.

“Some of the basic lessons of sports journalism have prepared me for writing press releases that are sent out to the entire Midwest League and the local Lansing media every day,” Ludlow said. “The skills I was taught go beyond writing for a newspaper. Whatever my next job is, I know I can handle it because my foundation was built so solidly.”

By incorporating discussions on media ethics and lessons on truth, Gilbert wants students to realize that “God can use you anywhere,” including sports journalism. “Despite a lot of criticism that the media gets, there is a pursuit of truth,” Gilbert said. “Every journalism entity has an ethical code of conduct that very often fits within the Christian worldview.” 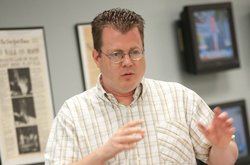