Stewarding Sexuality in the Life of a Christian

Yarhouse discussed same-sex attraction and the role of sexuality in the life of a Christian. Sharing from his experience as a professional counselor and researcher, Yarhouse described his counseling process—teaching his clients to understand the distinctions between attraction, orientation and identity.

“Same-sex attraction may be part of one’s experience,” Yarhouse shares, “but it does not have to define his or her identity…For the groups that we studied, the most salient meaningful part of their identity was an identity in Christ.”

“It was good for the Cedarville University body to hear about the subject from a counselor and researcher who works with this population,” says Jon Purple, dean for student life programs.

In addition to publishing more than 40 peer-reviewed journal articles, Yarhouse has authored several books on sexual identity including “Homosexuality and the Christian: A Guide for Parents, Pastor, and Friends” and “Homosexuality: The Use of Scientific Research in the Church’s Moral Debate.”

Listen to the recordings of Dr. Yarhouse's first and second chapel messages. 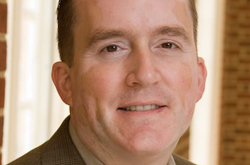 Dr. Mark Yarhouse is the Hughes Endowed Chair at Regent University, where he also directs the Institute for the Study of Sexual Identity. Photo Credit: Sexual Identity Institute