Students Choose to Drive Without Distraction

Friday, November 19, 2010
It began as a class project in public health and rapidly grew to become a campus wide initiative.

“We asked our fellow students whether they felt texting while driving was dangerous and if so, would they be willing to change their habits,” shares Lewis.

The nearly 3,200 students of Cedarville University were challenged by their own confessions, which indicated that perhaps more than half the student body texts at some point while behind the wheel of a motor vehicle.

“At this point in their lives, students tend to think they are invincible,” describes Carl Ruby, Cedarville University Vice President for Student Life. “The reality is, that if you get behind the wheel and are distracted, the likelihood of losing control of the vehicle increases. I am excited to see our students take the initiative on their own to change their texting habits.”

The grass roots “Put It Down: Distracted Driving” campaign, over the course of several weeks, culminated in students’ voluntarily pledging and signing cards to seal their commitment to not text and drive for the 10 days surrounding the Thanksgiving holiday.

As a side benefit, the first 200 students to pledge received a free cup of coffee from Rinnova, the University coffee shop. 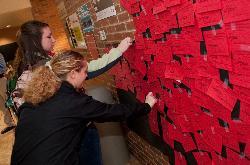 Students voluntarily pledged and signed cards to seal their commitment to not text and drive for the 10 days surrounding the Thanksgiving holiday. Photo credit: Scott L. Huck/Cedarville University