Students Living in the Middle East

Academic studies in a different country can be beneficial for any student. It takes more than class instruction, however, to truly familiarize oneself with a country. One must immerse herself in the lives of the people and expression of the culture to best experience the region.

“I start medical school this fall,” says Harpole, “and I was thinking of where I could begin language studies. It was amazing, as always, to see how God brought about His plan to lead me to Jordan.”

Both students studied at the University of Jordan in Amman. Their core classes consisted of modern standard Arabic—called Fusa. Harpole and Graff also took additional courses that consisted of other Arabic dialects, area archaeology and modern histories and thought. Graff often spent her afternoons attending various clubs about calligraphy, Arabic verb forms and culture. “After these,” shares Graff, “I also spent time with a peer tutor. We would talk in Arabic and in English, since I was beginning Arabic. We talked about her family, my family, Jordanian and Palestinian ways of life and what it means to be a good Muslim and a good Christian.”

Harpole also made it a point to delve into the culture and people around her. “I was also immediately taken to heart by the women of the country,” she says. “It was just the small things, like waiting for a bus together and in a few moments having shared our life stories. It was great to meet these women and be able to share these moments with them.”

Not knowing who their host families would be until the day of placement did not hinder Graff and Harpole from developing close relationships. “My host family lived next to a refugee camp,” says Graff. “They were Palestinian refugees themselves. We would sit together for meals, talking and eating delicious Palestinian food such as musekhan, a chicken and onion wrap with sumac, and mensef, a yogurt, rice, chicken and lamb dish.”

Living and studying in Jordan gave Harpole and Graff the opportunity to experience and appreciate a different and beautiful way of life. Graff explains, “The Middle Eastern culture is very family and group-oriented. The way they care for each other and the strong relationships and respect each has for elders is touching. One part of Islam that I appreciated on an everyday level was when the muezzin, a chosen person at a mosque, called the people to pray. It’s a beautiful sound, especially in the country side, where it echoes.”

The experience also opened the students’ eyes to certain realities. Graff describes seeing a refugee camp that neighbored her host family’s apartment: “Their apartment borders a multi-million dollar shopping mall as well as the Palestinian refugee camp. The contrast is very stark. I am troubled by the differences I see and my inability to change it. I told my host sister what I felt. She said that she and her mother help certain people in the camp. She confided in me about how it was very depressing to walk through the Palestinian shanty-town. When I asked her why, she said that there would always be more refugees coming from Palestine, and she alone could never help them all.”

Graff’s time in Jordan touched her life so much that she extended her studies there. Currently, she remains in the Middle East.

As Harpole reflects on what she learned during her time in Jordan she says, “The next time you meet someone with an accent, think of Hebrews 13:2—think of the entire book of Hebrews. Being a stranger in a strange land is something that, I think, would be beneficial to everyone. Spiritually, it was helpful to have demonstrated so clearly my longing for an ultimate home. Practically, my experience in Jordan taught me the importance of hospitality and ‘loving the stranger’ because I was once a stranger.” 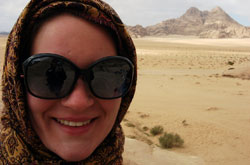