Accused of witchcraft and asked to falsely confess in order to be set free. The people of Salem, Massachusetts choose between standing for truth and surrendering to falsehood.

Cedarville University’s Department of Art, Design and Theatre will be presenting Arthur Miller’s “The Crucible” beginning January 26. Loosely based on the Salem Witch Trials that occurred in the late 1600’s, this story depicts the downfall of a Puritan town when a group of troubled girls start accusing people of being bewitched.

Miller shows the effects that dishonesty and accusation have amongst a group of innocent victims and guilty enemies. Although these events take place more than 300 years ago, the themes of the story are still being played out in the 21st century. Power and the cost of choosing between integrity and falsehood are revealed in the unfolding of Miller’s theatrical masterpiece.

“The Crucible” opens January 26 at 8 p.m. The event is open to the public. Tickets will be available for online purchase January 9. For more information, call 937-766-4491 or visit the Cedarville University “The Crucible” webpage . 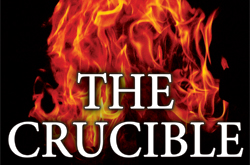