It all started with a Megabus and a five-day trip to Chicago.

Now, senior theatre major Denise Serna is heading to East 15 Acting School at the University of Essex in England. In September 2012, she’ll begin work on her M.F.A. in directing.

The opportunity arose through The University/Resident Theatre Association (U/RTA), an organization dedicated to advancing theatre by connecting educational programs, professional programs and performing arts industries. U/RTA holds three national auditions for students and professionals each year — in New York, San Francisco and Chicago — but because they only want the best of the best, student applicants need to be nominated by their schools. Despite the difficulty, Serna expressed interest, and after Cedarville nominated her, she was on her way to Chicago to audition for both acting and directing programs.

Though she began her theatre career as an actor, she discovered her passion for directing while at Cedarville and is excited about the opportunities it will provide, particularly in the areas of educational theatre and theatre of social change. “Directors teach actors to communicate something to the audience, so I feel they are like teachers in action,” Serna says. “They don’t just relay information so people can take notes; they actively educate their actors as performers and the audience as people and as thinkers.”

And that’s important to her as an artist, a Christian and a human being. Serna further revealed her perspective on directing by quoting Edvard Munch, famed painter of “The Scream.” “Munch once said, ‘We want more than a mere photograph of nature. We do not want to paint pretty pictures to be hung on drawing-room walls. We want to create, or at least lay the foundations of, an art that gives something to humanity. An art that arrests and engages. An art created of one's innermost heart.’ That’s what I think about when I approach theatre. Theatre should be more than something pretty to look at. It should force us to actively engage in conversations about who we are, what the world is and how we fit into it.”

After completing her degree at Essex, Serna plans to get a Ph.D. in performance as public practice from The University of Texas at Austin.

“As for employment,” she adds, “I’d love to work in high schools, especially in schools that don’t have a lot of funding allocated to their arts programs. I’ve seen great things happen in high schools that had no money but had passionate educators pursuing excellence. Theatre is about giving a voice to people, and by helping students discover their voices, I’ll be serving them, their communities and theatre as a whole.” 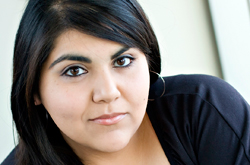 In September 2012, senior theatre major Denise Serna will begin work on her M.F.A. in directing at East 15 Acting School at the University of Essex. Photo Credit: Aimee Auclair