The Cedarville University theatre department was recently honored in several categories by the "Dayton City Paper." The University’s theatre program was compared to some of the best collegiate and community programs in the Dayton area as well as professional troupes, including Encore and The Human Race.

The newspaper recognized the department for the best collegiate production of a play with "The Miracle Worker," directed by Donald Jones, and awarded Robert L. Clements, associate professor of theatre, the best lighting design of a play in "Much Ado About Nothing."

Both plays, along with "You Can’t Take it With You," also received several honorable mentions, including best direction, best scenic design and best costume design.

Recent graduate Laura Anfang and senior student Jessica Hickling both received honorable mentions for best leading actress in their roles as Helen Keller and Annie Sullivan respectively in "The Miracle Worker." Both women were pictured on the front page of the paper.

"I’ve long thought that Cedarville’s theatre program has been one of the best-kept secrets in Christian higher education," says Moore. "It’s great to see the theatre program doing so well even when compared to the best undergraduate theatre programs in the Midwest." 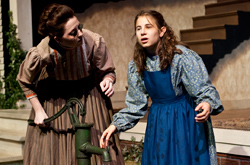