On the brink of a new phase of life, Jon McGinnis '99 is blending his military and pastoral experience to minister in Costa Rica.

When Jon McGinnis '99 joined the Army National Guard at Fort Benning, Georgia, in 1992 for basic training, he had no concept of how God would use that experience in his future ministry. But today, as he prepares to take his family to a new life in Costa Rica, Jon can see how all of his experiences have worked together for this purpose. He also discovered how much he enjoys working with military people, which helped focus his goals.

Currently preparing for missions work, Jon, who studied Christian education at Cedarville, has joined TACTICA, a new ABWE ministry. TACTICA stands for Teaching Authority Christian Truth in Central America. TACTICA was developed by Ryan and Gretchen Rought in 2006 and seeks to "fulfill the Great Commission by investing in the lives of Central American authorities and their families through high-quality police training, evangelism, and discipleship."

"The culture in Costa Rica is very anti-police," Jon explained. "Officers are not respected — or even liked. Unfortunately, that's often because they're crooked or take bribes." Some missionaries might choose to ignore law enforcement to avoid being hassled, but TACTICA targets these officers, reaching out to them with the Gospel. As their work progresses, Jon and his teammates hope to see people grow to respect the police.
As part of his required preparation, Jon is completing some coursework to build his credentials. One area hes received training in — dignitary or executive protection — has already proven to be useful, but training alone wouldn’t be enough to gain the respect of Costa Rican police. His experience in the Army National Guard, however, would.

"I'm not a cop," Jon stated. "And cops don't listen to you unless you're one of them. But when police from Costa Rica go to do specialized training, they attend the international school at Fort Benning. I didn't know when I signed up in 1992 that God was opening a door for me. Because of that connection, I immediately have an inroad into their lives. They treat me with respect and as a peer."

Though still raising support, Jon is already involved in missions in Costa Rica. Jon and his wife, Joni (Shearer) '00, completed a week of ministry in Costa Rica in early February. While there, Jon taught a course on executive protection, and Joni ministered to the officers' wives. Sometimes the TACTICA team will host conferences to reach officers and their wives, or they will provide training to build a specific skill set — whatever will help open doors to allow future conversations.

After the police officers and their families come to Christ, Jon's focus will be on discipleship and involving them in church. "Ryan is the evangelist on the team," Jon said, "while Joni and I will work to funnel new believers into the local church, which is our passion." Not coincidentally, Jon has been a pastor for the past 10 years. Before that, he served in the Ohio Army National Guard as a TOW missile gunner (infantry), which gives him a background suited to his new work.

Jon and his wife learned about TACTICA several years ago while on a missions trip to Costa Rica with the Roughts, who were investigating the area to prepare for their future ministry. The two couples quickly became good friends. When Jon and Joni felt God leading them into a different ministry, they knew TACTICA was a good fit and that their areas of giftedness would complement the work there.

"So far, we've seen about 300 people come to Christ, and they all need discipleship," Jon said. "We need to get down there to help."

Jon and his family plan to be working full time in Costa Rica by the end of the summer. Jon and Joni have four children, Katie, Meghan, Irelynd, and J.D. You may contact Jon at jmcginnis@abwe.cc, or learn more at tacticaministries.org. 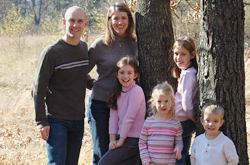