Cedarville University nursing student Joanna Pyles and five other nursing students were led by a recent Cedarville nursing grad on a trip of love and redemption in May to Swaziland, Africa.

The team left on May 4 for the city of Manzini in a country nestled against the top of South Africa with Mozambique on its eastern border—an area where poverty is the norm and the HIV virus runs rampant.

The group spent their first days orientating themselves in the city and the hospital and getting to know their hosts, Harry and Echo VanderWal, leaders with The Luke Commission. Once they were prepared, the team then spent the rest of the month traveling throughout the country offering two or three health clinics per week. Each clinic lasted a day and served hundreds of patients.

At the clinics, the nursing students assisted with HIV testing, blood pressure and glucose screening, drawing blood, starting IVs, cleaning wounds, giving eye exams, building wheelchairs and checking children for worms, measles and other common diseases. They also spent time in prayer and shared the gospel with the Swazi people.

The students also spent time working at the national hospital, where they assisted with baby deliveries and worked in the pediatric unit, emergency room and female medical ward.

Seeing the endless suffering in villages throughout the country, and even in the treatment of birthing women at the national hospital, caused Pyles to reflect on her own life and faith.

“I realized that I do not understand the ways of our Lord,” says Pyles. “I do not understand His purpose in this suffering except to know that He is a loving, sovereign God who deserves our utmost praise. I am so thankful for the gift of Jesus Christ, who suffered more than any of His children to give us hope beyond this grave. I am so thankful that the Swazis can find unprecedented joy in knowing that there will soon come a day when their tears, disease, poverty and death will be no more. Jesus will overcome.”

Toward the end of the trip, the team switched gears and spent a day traveling to schools deep in the African bush and delivering Operation Christmas Child boxes to children.

“With squeals of excitement, the children open the only gift they will ever receive in their lifetime,” describes Pyles. “The crowd of children roars with laughter, screams and shouts ‘Thank you Jesus! Thank you, Jesus!’” 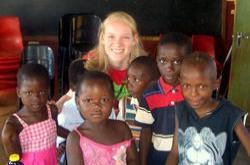 Joanna Pyles, participated in a missions trip to Swaziland Africa this past summer where she worked with other nursing students to alleviate some of the suffering of the Swazi people. Photo provided by: Joanna Pyles