Cedarville University welcomes Mark Pinkerton, M.D., to the community. He sees Cedarville students at University Medical Services each week through his affiliation with Kettering Health Network.

Pinkerton earned his bachelor’s degree in chemistry from Cedarville University and his master’s in biochemistry from Miami University. He earned his Doctor of Medicine from the Medical College of Ohio at the University of Toledo and completed his residency at Flower Hospital in Sylvania, Ohio.

“My goal is to help each person live above their present condition and take command of their health and life,” Pinkerton described.

Pinkerton works with college students because, as a parent, he understands the worry that other parents experience, from a distance, for their children. He enjoys being part of the solution and hopes to alleviate that worry.

“I pray regularly that I can be a blessing to someone today,” said Pinkerton. 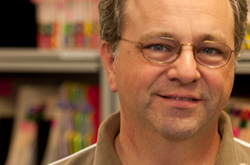