Echo VanderWal dreamed of serving Christ in Africa since she was 8 years old. After graduating from Cedarville University in 1996, Mrs. VanderWal went on to graduate from Kettering College of Medical Arts in 2000 as a physician assistant. Mrs. VanderWal first practiced in surgery and then moved to pediatrics.

Now ministering in Africa with their four sons, the VanderWals are living their dream of serving Christ on the overseas mission field.

At the Luke Commission in Swaziland, the VanderWals work alongside 15 highly-trained Swazis to provide healthcare to 25,000 rural patients each year. The Luke Commission is a faith based, non-profit organization that provides HIV/AIDS and TB interventions to the people of Swaziland with an integrative and biblical approach. 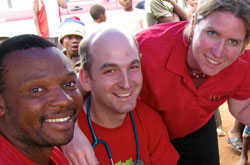