"Wouldn't It Be Lovely?"

by Denise Serna ’11, as told to Sharyn Kopf and Corwin Briscoe ’11

I had no idea what to expect. After all, I’d never been to camp before, so I was curious to see what it was all about. The one I chose, through the Fellowship of Christian Athletes, had spots available, and I signed up — even though I wasn’t a Christian and I didn’t like sports. But it was amazing! That week, I heard the Gospel and trusted Christ as my Savior.

That camp experience changed my direction. Though I’d always dreamed of going to Juilliard to study theatre, I turned my attention to Christian colleges because I wanted to grow more and serve God. I initially considered the Christian school near my home in San Juan, Texas; but it wasn’t accredited.

During my junior year of high school, I was flipping through an issue of Campus Life magazine when I saw an ad for Cedarville University, which, fortunately, had a theatre program. I was considering other schools at the time, but God kept placing Cedarville in front of me. My parents weren’t thrilled at the prospect because they didn’t like the idea of my being that far from home. Eventually, though, they gave their OK. I think they could see I was passionate about what I do and about my faith.

God is interesting. Every time I would start to doubt — whether to choose Cedarville or how I would pay for it or whatever — He would make something awesome happen. One day I was looking at the cost of tuition, and I just started crying. It seemed so impossible, and I was afraid I wouldn’t be able to go. But when my parents came home, they handed me a letter from Cedarville. I’d gotten a scholarship! I was blown away by God’s perfect timing.

Cedarville accepted me in September of my senior year, and I was determined to attend. God continued to prove it was the school for me, and I knew that somehow, someway, I would arrive in Ohio by August.

When the time came to head east, we didn’t have the money to buy a plane ticket, and I couldn’t drive because my car wasn’t in good enough shape. Even if it had been, I couldn’t afford the gas. My only option was to travel by bus. So, I jammed my entire life into three duffel bags and boarded a Greyhound.

It was terrifying! I’d never traveled across the country by myself before, and though the bus is fine for short trips, it leaves something to be desired on those long hauls. Still, I knew God was with me, and I made it to Cedarville safely. My luggage, however, didn’t. All I had were a bag of shoes, a toothbrush, and my Bible.

From the moment I stepped on campus, I knew I was in the right place. Everyone was helpful. My roommate and her parents let me stay in their hotel room with them. When the University found out I had nothing, they sent Debby (Zaller) Stephens ’78 and Jen Castellani ’02 to take me shopping. They bought me clothes, school supplies, bathroom stuff, and bedding. Not only that, but a post office worker gave me some of her daughter’s clothes, and the bookstore sent some T-shirts. Fortunately, my bags showed up a week and a half later. Through it all, God was working, and I’m still amazed at how He provided.

I was thankful for all God had done, but by Christmas, I was really homesick. Leaving Texas was a big deal because I live in such a family-oriented culture. And it is so cold in Ohio! Since I had been considering the University of Texas at Austin for grad school, it started to make sense to transfer there. I filled out an application and kept praying, yet I knew what God would say.

The night before leaving for Christmas break, I talked to a friend from home. I realized why I really wanted to leave Cedarville: I was afraid of failing. Since I hadn’t been cast in any plays, I had started doubting myself. I felt that if I were back in Texas I would be acting, because that’s how things had been in high school. I soon realized that was a terrible reason to give up on something!

Knowing God would work everything for good, I got back on track by immersing myself in the theatre program. I accepted a job with the scene shop, which was amazing because I now get paid to do something I love. Every time I work, I learn something new.

It’s funny, but in high school I didn’t do much behind the scenes because I was on stage. Last year I wasn’t on stage at all, but I learned a lot. Serving as stage manager for a senior theatre project, building sets, and even being on the props crew showed me things I didn’t know I could do. It made me recognize the importance of being as well-rounded as possible. Now I don’t just want to get my feet wet — I want to get my knees wet.

I’ve been at Cedarville for almost two years now, and I’m still learning. Last fall I was cast in a senior theatre project called Identity Crisis, which explored the attributes of God and how we find our identity in Him. I also was the dramaturg for Alpha Psi Omega’s production of Flowers for Algernon. And this February I played Eliza’s landlady, Mrs. Hopkins, in My Fair Lady.

This girl who dreamt of going to Juilliard now sees God’s plan in a different light. I went to camp because He led me there, and I’m at Cedarville because He wanted me here. He has blessed me, and I’ve learned more at Cedarville than I ever could have imagined. I can’t wait to see what God will do next! 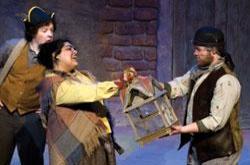