Brian Orme '96 writes essays, columns, interviews, study guides, and a little bit of fiction. His writing has appeared in print and online media outlets including Neue, RELEVANT Magazine, Burnside Writers Collective, The Washington Times, Dayton Daily News, and The Wall Street Journal. He is also the general editor of churchleaders.com.

When did you realize you were a writer?
I wrote my first story in fifth grade. It was a really bad detective mystery. Then, as a high school freshman, my English teacher singled out a short story I wrote. I think it was called Crack of Dawn. What a horrible title. It was about a girl named Dawn who dated a boy that loved practical jokes. He wanted to propose to her in an airplane, but she ended up falling out. It was a tragedy — both the story and the writing, I'm sure. But I still go back to the excitement of writing that story and how it made me feel to craft it. There was nothing like it for me.

How did you become a professional writer?
I began to shape my writing and sharpen my skills by writing online for RELEVANT Magazine. Eventually, I became their church section editor. Then years later, I worked as managing editor for Neue, a ministry leader journal (now a magazine). I did this while working in full-time ministry at Community Grace Brethren Church in West Milton, Ohio.

Around the same time, I started writing as a freelance journalist and columnist for Dayton Daily News. This is where I discovered my love for interviewing interesting people and sharing compelling stories that impact the Church. God was gracious and opened up some great doors for me.

What is your favorite beverage to drink while writing, and does it depend on the interviewee?
I love hot Starbucks or Seattle's Best coffee. However, I work in my basement (very glamorous), and it's cold. I typically end up sipping on cold coffee while interviewing.

Who are some of your most memorable interviewees?
I had a heated debate with Ted Haggard over forgiveness, grace, and restoring leaders in the Church. Interviewing Bill Hybels about listening to the voice of God was a real treat for me. My most fun interview was with A.J. Jacobs, author of The Year of Living Biblically.

To what challenges or opportunities in the Church has this work exposed you?
I recently interviewed Dr. Tony Evans about racial reconciliation in the Church. He strongly believes God is holding back His blessing on the American Church because of our racism and lack of unity. He could be right. Even among great challenges, I still have great hope. We are Christ's Church after all.

On a side note, it was fun to talk to Dr. Evans about the time he spoke in chapel at Cedarville and the power went out. He preached the whole sermon in the dark — it was hands down the most powerful sermon I've ever witnessed.

Do you see your role as a writer to define, or redefine, "Christian culture"?
I think "Christian culture" is actually a problematic term. There is a subculture within Christianity that often mimics secular culture, but that has never been that interesting to me. I think we need to throw out the term and start talking more about how the Church can redeem and shape culture by living out the Gospel in radical ways. Andy Crouch's book, Culture Making, is a great read that discusses this in more detail.

What authors or books have been influential in your journey?
Brennan Manning's book, The Ragamuffin Gospel, was influential in helping me understand God's grace. Flannery O'Connor's book of essays about writing, Mystery and Manners, also played a big role in how I approach writing, art, and worship.

What books are you reading now?
I'm reading How to Write a Sentence by Stanley Fish, The Pastor by Eugene Peterson, and The Tiger's Wife by Tea Obreht.

What advice do you have for aspiring writers?
Keep writing no matter what. Give your writing over to God, and ask Him to direct it and redeem it. I love the craft of writing, so it isn't hard for me to keep at it. Although, the actual writing can be very hard at times. I think many people want to be writers but forget that you have to work tirelessly to write something beautiful and enduring. Of course, I'm still a maturing writer myself.

What is your dream job?
Novelist. Maybe stand-up comedian. No, definitely novelist. 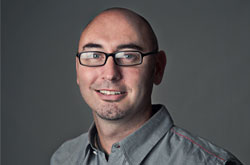 Brian Orme '96 is an editor, creative writer, and freelance journalist.