Sarah Greenberg ’09 lived and worked far away from her loved ones, working a job that few envy. In the spring of 2011, she was a second lieutenant at the Landstuhl Regional Medical Center (LRMC) near Germany’s Ramstein Air Base. The largest American military hospital outside of the United States, LMRC receives war casualties from Afghanistan and Iraq for treatment and care. After a 12-hour shift on a medical-surgical floor, these are the kinds of stories Greenberg remembers most.

One soldier had been shot in both hands. “He said, ‘I would really love it if I could brush my teeth right now,’” Greenberg said. “So I helped him brush his teeth.”

Another soldier had been struck by a roadside bomb, and he lost his right arm. The day he arrived in Landstuhl, Greenberg helped him get out of bed to walk for the first time since he had been wounded, but he had trouble keeping his balance. “Standing up was very emotional for him,” she said.

He was processing more than just his own fate. Some of his fellow soldiers had died in the blast.

“I spent hours just listening,” Greenberg said. “When he first got there, he was really upset and didn’t want to talk, but by the end of my 12-hour shift, he was actually smiling and joking around with me.” She gave him a Bible to read before he was flown home.

Before her senior year at Cedarville, Greenberg spent a month in Landstuhl as part of her ROTC training. That’s when she decided she would request Landstuhl as her first duty station to begin her four-year commitment to active duty. “I thank God all the time for putting me there, because I saw it as a huge blessing,” she said.

Greenberg said everyone at the hospital is dedicated to the mission, but seeing the reality of war 12 hours at a time can be difficult. “I prayed every day on my way to work for strength to cope with whatever I would see that day,” she said. “I tried to focus on the patients, attempting to make them comfortable and meet their needs during those 12 hours.”

Greenberg’s ability to cope with the effects of war was rooted in her faith. She is thankful for the Christian friends she made at Cedarville who helped her decide to strengthen her faith. “I was there with other women who had graduated from nursing school, I didn’t know anyone who has friendships like I have,” she said. “And I didn’t know anyone else who benefited from the encouragement and spiritual growth that I experienced in college.”

In turn, she wanted to give her patients spiritual care in addition to the physical care they needed. Her patients were at low points in their lives and looking for comfort, so she found that they were often receptive to talking about God. “I could be there with them when they were beginning to question why they lived and their buddies didn’t,” she said.

“The important thing is to remember to pray for and support these young soldiers who are still fighting for our country,” she said. 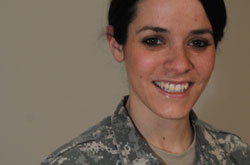 Sarah Greenberg '09 said seeing the reality of war 12 hours at a time is difficult. She prayed on her way to work for strength to cope with whatever she would see that day. Photo Credit: U.S. Army photo by Phillip Jones