On September 8, 2011, Cedarville University's class of 2015 organized a campus-wide event called “Barefoot Thursday,” during which students could donate their shoes and go barefoot for a day to raise awareness about global poverty. The event was a tangible response to Palmer Chinchen’s book, True Religion, that incoming students had read over the summer. The author spoke in chapel that day, and students gave more than 3,200 pairs of new or gently worn shoes.

In May, Jon Purple, dean for student life programs, joined Chinchen in Liberia to distribute the shoes along with four students from Cedarville, two from Liberty University, and several members of Chinchen’s Arizona church, The Grove.

The team was based at African Bible College University (ABCU) in Yekepa, Liberia, and several ABCU students joined the effort. The large group split into smaller ministry teams that served in medical clinics, orphanages, construction sites, and prisons.

“The trip was amazing in many ways,” said Purple. “It was hard to see the poverty but so encouraging to see the African believers share the Gospel in their country, the receptivity and friendliness of the Liberian people, and their thankfulness for the gift of these shoes.”

One of the highlights for Purple was serving and worshipping alongside African believers. “It was moving to experience Christianity from a perspective that was not white, Western, or middle class,” he said. “We were blessed to be the hands and feet of Jesus there, led by our African brothers and sisters in Christ.” 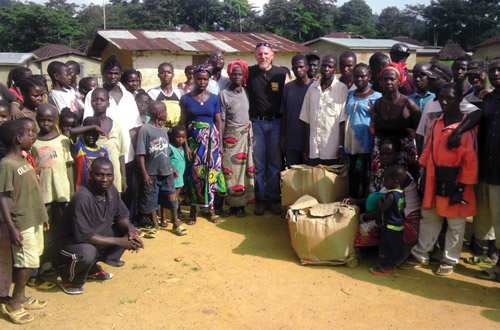 In May, Jon Purple and a team of students traveled to Liberia distributing thousands of donated shoes.