As graduation approaches, three senior students from the department of biblical and ministry studies at Cedarville University, look back on their favorite memories and look ahead to their futures.

Brandon Hellwig, an international studies —  missiology major with a Middle Eastern studies minor, is planning on teaching in an inner-city, special education classroom in conjunction with Teach for America (TFA). Hellwig is confident that Cedarville prepared him to teach for TFA.

Hellwig remembers his professors and the impact they have had on him: “[Dr.] G has influenced my views about my major and missiology in a large way,” he said. “Dr. Mills' philosophy classes make sense of the world of questions that is philosophy. I love his lectures because they set theories straight for me that I had previously thought I'd never understand.”

Jeffrey Lynch, a pastoral studies major, plans to begin working part time at a church where he interned previously. “I will also be starting seminary online,” he said. “Cedarville has prepared me theologically, biblically and practically to start working on a church staff under the supervision of the senior pastor as well as provided me with an amazing foundation for graduate work.”

Lynch will remember the relationships he formed with his professors: “I think some of my best memories are communicating one-on-one with the Bible faculty and realizing that they really care for the students, and that what they are doing is more than a job.” One of Lynch’s professors, Dr. Jeff Cook, drove four hours to perform Lynch’s wedding ceremony. “I don’t think this is normal on other campuses across the U.S.,” Lynch said.

Lynch said he has not had a bad encounter with any professor in the Bible department. “In some way, every professor I have taken has influenced and challenged me,” he said. “The two professors that come to mind as having the biggest influence and impact on my life have to be Dr. Cook (Urban Ministry and Contemporary World Missions) and Dr. David Warren (Homiletics).”

For Lynch, Cedarville provided a challenging environment that allowed him to learn holistically. “Cedarville is a place that that doesn't seek to indoctrinate its students with opinions, but rather to give them personal, mainstream and even minority views on the issue at hand, allowing the student to develop his or her view based on good theology and hermeneutical principles.”

Amanda Brindley is a Bible preseminary major at Cedarville. Her best memories at Cedarville are of the professors and students she connected with in her classes. She said, “The thing I'll probably remember and miss most is just being in the Bible department offices, working on grading in the faculty lounge and talking with various professors. The Bible department professors are funny, genuine, interested in building into students' lives and have great knowledge and wisdom to share.”

Brindley has not decided where she will end up in the next year; yet she is confident: “In some sense, being at Cedarville has helped to prepare me for leaning on God for strength even as I enter the next unknown chapter of life.”

Brindley was especially affected by Dr. Gregory Couser during her time at Cedarville. “Dr. Couser has challenged me to think on a more practical level and to not intellectualize everything so much that I don't feel a need to live it,” she said. “He often says, ‘We want to understand the Bible so we can obey it!’ He has also encouraged me to live in today, reminding me often that life is today and to not live past it.”

Brindley offers advice for future students in the Bible department. “You will be challenged holistically, but it will be worth the time, effort and pain,” she said. “You'll probably have some late nights and early mornings. Pray often, focus on the cross, lean on Christ and look for what you can take and really apply to your life. Make the most of your classes and take the opportunity to get to know your professors and to learn from them outside the classroom.” 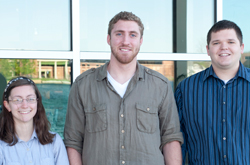 As graduation approaches, Amanda Brindley, Brandon Hellwig and Jeffrey Lynch look back on their favorite memories in the department of biblical and ministry studies at Cedarville University.