Cedarville’s College Republicans organization led a group of 26 students to Washington, D.C. for the Conservative Political Action Conference (CPAC) to interact with multiple presidential delegates and hear from a wide range of conservative political leaders.

Cedarville’s College Republicans have attended CPAC for the last few years with other universities in the Ohio College Republican Federation. Rachel Steetle, a senior public administration major and chair of the Cedarville chapter, shared that the conference consists of over 75 breakout sessions that discuss a variety of issues such as nuclear weapons, capital gains taxes and the Latino vote. She stated that the sessions are critically important because they discuss events that are not necessarily discussed at Cedarville on a daily basis.

“It's important to get young people involved and interested in politics because they are the future,” Steetle said. “What goes through Congress now will affect students later when they enter the real world.”

Brandon Gahman, a junior accounting and finance major and member of Cedarville’s College Republicans, stated that CPAC gave him the opportunity to listen to important speakers that represent conservative values, the Republican Party, free-market capitalism and fiscal conservatism.

“CPAC gave us the opportunity to be involved in the political spectrum that will define the headlines for this upcoming year,” Gahman said.

Gahman also shared that he discovered the value of networking while at CPAC.

“By participating in luncheons and student events sponsored by various think-tanks and policy firms, I was able to meet young conservatives from many different fields of study and universities,” Gahman said.

Overall the students enjoyed learning about the variety of critical issues at stake in the 2012 elections and were inspired to actively participate in the elections.

“I encourage the students to keep being active politically, specifically with College Republicans at Cedarville, and also in their hometowns,” Steetle shared. “Going to a conference to learn more about politics doesn't mean anything if you don't go back home to fight for the cause.”

Cedarville’s College Republicans have attended numerous other conservative political events including the Values Voter Summit in Washington, D.C. in the fall of 2011, each with the purpose of encouraging students to take an active role in political affairs. 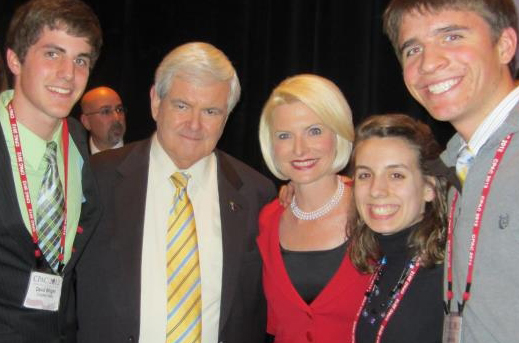 Students had the opportunity to interact with several presidential candidates such as Newt Gingrich at CPAC. Photo courtesy of Rachel Steetle.