Cedarville University will host an open house in the newly renovated Carnegie Center for the Visual Arts on Oct. 6. The office of the president will welcome visitors to the completed building for the first time from 10:30 a.m. – 12:30 p.m.

Guests at the open house will include Mary Ellen Armentrout of Plain City, author of the book “Carnegie Libraries of Ohio: Our Cultural Heritage.”

“It’s a marvelous renovation and restoration,” Armentrout said. “It’s especially beautiful because the architect kept the original design of the building.”

The Center was built in 1908 as a Carnegie library, named for Andrew Carnegie, who donated millions to build libraries across the country. The library was used by Cedarville College and the town until 1960. It was later dubbed the Fine Arts Building and housed classrooms, offices and studios for Cedarville University’s department of art, design and theatre.

The University recently completed much-needed renovations to the building, which restored structural problems and opened the art studios to natural light.

Terry Chamberlain, chair of the department of art, design and theatre, said the Center was filled with energy and excitement as soon as students had access to the renovated building.

“To lose the building to disrepair or demolition would have been such a loss to the university and the community,” Chamberlain said.

The University is also renovating Hartman Hall and the annex to Alford Auditorium to house offices and studios for the department of art, design and theatre . 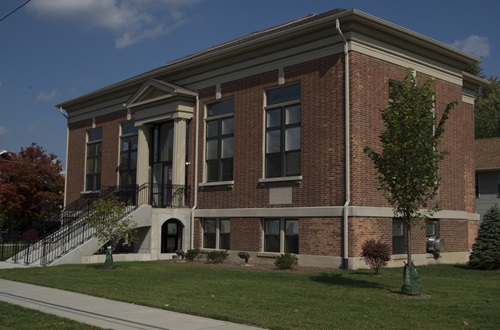 Cedarville University will host an open house in the newly renovated Carnegie Center for the Visual Arts on Oct. 6.