A team of Cedarville electrical engineering students and one robotic boat traveled to Virginia Beach, Virginia, to compete in the fifth annual International Roboboat Competition sponsored by the Association for Unmanned V ehicle  Systems International (AUVSI) and the Office of Naval Research. This competition requires students to build a small autonomous surface vessel capable of navigating an aquatic course and completing various tasks while controlled by its onboard computers.

The Cedarville entry was built and programmed by students over the course of the 2011–2012 school year. The design incorporated live video for locating colored buoys and channel markers as well as a digital compass and GPS system to augment navigation. All of the sensor data is fed into an onboard laptop computer that makes all navigational decisions for the boat. The navigation software was written by students and comprised more than 3,000 lines of computer code.

Since this was Cedarville’s second year to participate in the competition, students were able to build upon the lessons learned in a previous competition. During qualifying, the Cedarville boat successfully navigated through the speed gates and then through four channel gates earning them a berth in the wildcard run to be held the next day. With some revisions to the navigation computer code, the boat was able to navigate the speed gates and an impressive six channel gates during the wildcard run very nearly catching the Virginia Tech boat for a slot in the finals.

“I’m extremely  happy with the progress we made this year,” reflected team advisor Tim Tuinstra, Ph.D., Associate Professor of Electrical Engineering. “To build any kind of autonomous system is extremely difficult and takes a great amount of ingenuity and innovation. These students have made significant strides toward that goal. I look forward to what we’ll be able to do in the 2013 competition  building on the groundbreaking work accomplished by this dedicated team.” 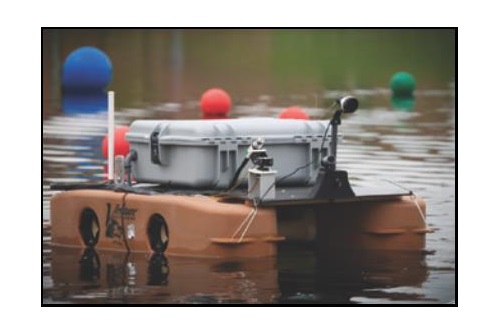